The incident happened at Eha-Amufu junction, in Enugu Ezike on July 22, 2022. 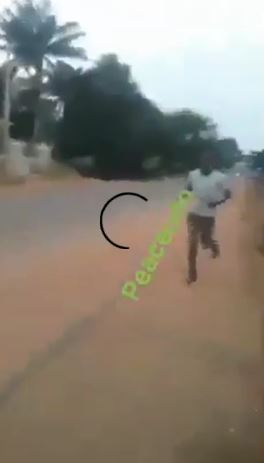 A gun battle has ensued between unknown gun and men of the Nigerian Army at a checkpoint in Enugu state.
The incident according to reports, happened at Eha-Amufu in Enugu Ezike, located in Isi Uzo Local Government Area.
A video shared online, showed the unknown gunmen chasing after the soldiers from the checkpoint as they scampered for safety.
The sad incident happened on July 22, 2022.
Shockingly, several of the residents were seen coming out of the streets and cheering them, according to a report by LatestNGnews.com.
Several of the residents who came out in numbers, joined the gunmen to give the military men a chase, out of their community, saying that they do not want any military checking point in their communities again.