The NLC President, Comrade Ayuba Wabba, and the presidential candidate of the African Action Congress, Omoyele Sowore, among others are currently leading the Day 2 protest in solidarity with ASUU in Abuja. 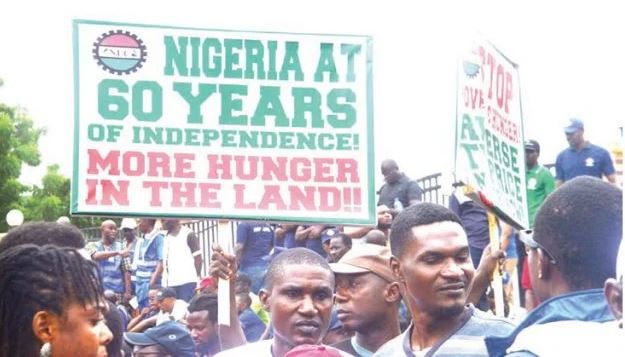 According to a report by The PUNCH, the Nigeria Labour Congress and its affiliate unions have continued their protest.

The groups on Wednesday in Abuja continued their solidarity protest in support of the five-month strike by the Academic Staff Union of Universities.

The NLC President, Comrade Ayuba Wabba, and the presidential candidate of the African Action Congress, Omoyele Sowore, among others are currently leading the Day 2 protest in solidarity with ASUU in Abuja.

Specifically, the NLC said the money the two major political parties – the All Progressives Congress and the Peoples Democratic Party – generated from the sale of forms to aspirants could address ASUU’s demands.

The university lecturers had shut down public institutions on February 14 over the inability of the Federal Government to implement the agreements it made with ASUU in 2009 as well as the refusal of the current administration to exempt lecturers from the Integrated Payroll and Personnel Information System.

ASUU had also asked the government to increase funding of tertiary institutions and pay outstanding allowances.

But on Wednesday, the protesters converged at the Unity Fountain and continued with the two-day protest in Abuja over the prolonged strike by university workers across the country.

This comes a day after a similar demonstration was held in various states of the Federation, except for the Federal Capital Territory.

The protest began at about 9:30 am after members of the NLC leadership and leaders of various affiliated unions, as well as members converged on the Unity Fountain in the nation’s capital.

Among those physically present were Wabba, Sowore, ASUU President, Professor Emmanuel Osodeke, and the immediate past President of ASUU, Professor Biodun Ogunyemi, among others.

PUNCH Metro observed a heavy security presence at the venue of the protest comprising officers of the Nigeria Police, DSS, NSCDC, among others.

Our correspondent gathered that the protesters planned to march down to the National Assembly where the NLC president would deliver a message from the labour unions to lawmakers.