The protesters led by NLC President, Ayuba Wabba, were well protected with different security forces while they marched from Unity Fountain to National Assembly. 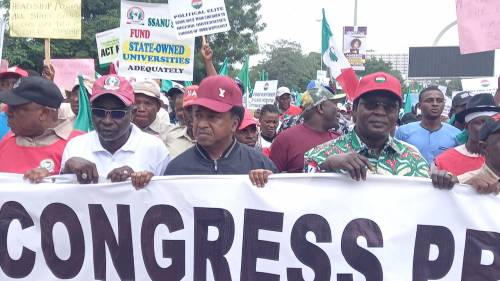 Shehu Sani, a former Senator who represented Kaduna Central in the 8th Assembly, has joined the NLC protest in Abuja.

The ex-lawmaker, on Wednesday stated that the Nigerian government was lying by claiming that there was no money to fund the country’s university system.

Sani urged the government to do what is necessary.

He made this known as he joined the protest organised by the Nigeria Labour Congress (NLC) in solidarity with the striking Academic Staff Union of Universities (ASUU) which commenced at the Unity Fountain, Abuja.

SaharaReporters had earlier reported that the NLC grounded Activities in Central Area of FCT in continuation of its two-day nationwide protest in solidarity with the strike action of the Academic Staff Union of Universities.

Scores of protesters on Wednesday stormed Unity Fountain in Abuja carrying placards with several inscriptions that called on the relevant agencies to attend to their demands.

The protesters led by NLC President, Ayuba Wabba, were well protected with different security forces while they marched from Unity Fountain to National Assembly.

The former lawmaker who addressed the protesters at the Eagle’s Square said they were out to secure Nigeria future.

"We are here to save the future of our country Most of the people in government today are products and beneficiaries of public education. Why do you want to destroy the system that made you who you are today?" he said.