Adijat Adenike Olarinoye recorded a total of 203kg in the women’s 55kg weightlifting event to win Nigeria’s first gold medal in the games. 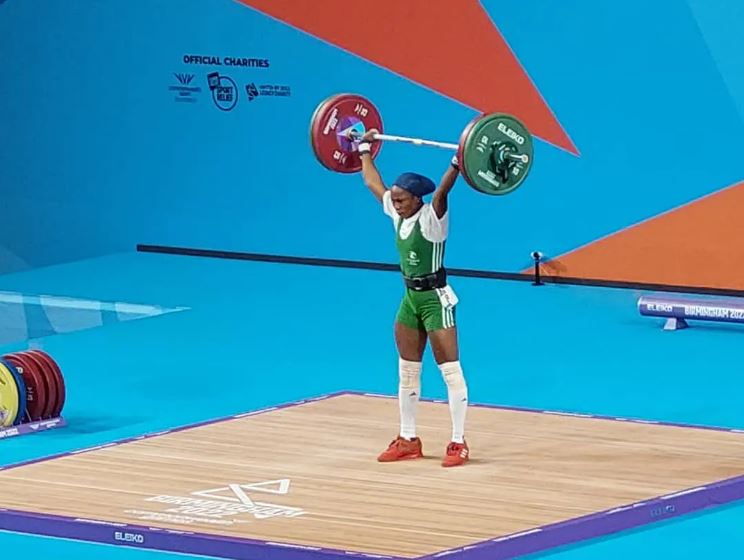 Adijat Adenike Olarinoye recorded a total of 203kg in the women’s 55kg weightlifting event to win Nigeria’s first gold medal in the games.

Before winning the medal, Olarinoye had set two records in 10 minutes, lifting 90kg and 92kg in the Snatch category of women’s 55kg Weightlifting event.

The Nigerian anthem was sang while the country’s flag was displayed shortly after the gold medalist was decorated.

Nigeria almost started the games on a shaky note over the absence of kit. The BBC had reported how a British sportswear manufacturer had to answer an SOS call from Nigeria’s Commonwealth Games team.

Gino Ruffinato, manager of the MG Sportswear firm, which is based in a town near Birmingham, said at first thought it was a “wind-up” before launching his 14 staff into action.

“As it progressed I started getting emails with orders on, so at that point I thought, hang on, I think this is serious,” he told the BBC.

“When they hit us with the deadline saying it needs to be there for Friday and today was Tuesday… there’s all the fabric, the print, the designs to get out in two days. It was a bit hair-raising.”

His team had to make 200 pieces of kit including running vests and shorts, staff tracksuits and even 400 Nigerian badges.

Ruffinato said it had been “panic stations” but his staff had embraced the challenge.