According to Mr Nweke, the victim was sent on an errand when the suspect allegedly lured her to his house and [email protected] her. 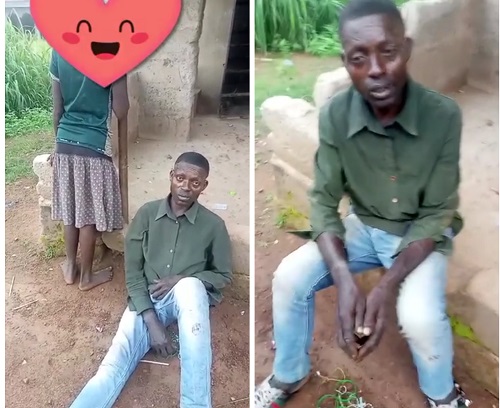 A man has been apprehended while defiling his neighbour's 12-year-old daughter.
The suspect, 42-year-old man identified as DonChris John was caught r#ping the mentally unstable daughter of his neighbour girl in Ebonyi State.
Chairman of Human Rights Defenders (HURIDE) Sampson Oko Nweke, who disclosed this on Facebook, zsaid the incident happened on Saturday, August 6, in Inyere community, Ezza North Local Government Area of the state.
According to Mr Nweke, the victim was sent on an errand when the suspect allegedly lured her to his house and [email protected] her.
The suspect confessed to the crime, claiming that the girl told him that they should 'do something'.
Read the full report below:
This man here was caught [email protected] a 12yr old mentally unstable girl, a daughter of his close neighbour. The 42yr randy old man gave his name as DonChris John from Onunweke Inyere.
The little girl was said to have been sent on errand by his father when Mr John intercepted, induced and [email protected] her. It was the wailing of the girl that attracted neighbours who rushed to John's house and shockingly caught him in the act.
The neighbours successfully disentangled the victim from her rapist and immediately dialed the Human Rights Defenders (HURIDE) after they had arranged with Ebubeagu to guard him from escaping. The call came some minutes before 5pm but HURIDE got there a few minutes before 6pm. It was above an hour drive.
The alleged rapist, Mr Don Christian John admittedly confessed to HURIDE;
"I saw one small girl going somewhere, a daughter of (name withheld); I called her to come and help me peel cassava. While she was helping me peel my cassava, she told me she was hungry. As I went inside to bring the food, she followed me to eat and she followed me. She said to me that after eating the food we will do something (have s#x) and I accepted. When I pressed her breast,she started shouting. I actually inserted my pe*nis, but it did not enter very well" before passers-by besieged my house." he said.
Meanwhile, HURIDE, with the help of some Village leaders and Ebubeagu security men, ensured the suspect was taken to a nearby Achiagu police station from where he will be transferred appropriately for onward trials. The girl is being brought to Abakaliki for medical screenings, possible treatments and proper counseling.
Top Stories