The prophet made the revelation during a chat with journalists at his residence in Otokutu, Ughelli South council area. 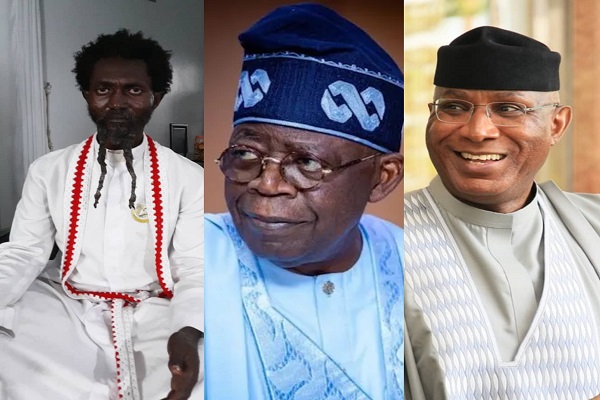 According to TheNation, a prophet has assured the candidate of the ruling All Progressives Congress (APC) Asiwaju Bola Ahmed Tinubu of victory in 2023.
The Delta cleric, Prophet Coming-of-the-Lord also predicted Deputy Senate President, Senator Ovie Omo-Agege will win the Delta governorship poll.
The prophet, who is of The Last Day Church of God, a.k.a Deliverance Ministry for the Kingdom of God, stated these during a chat with journalists at his residence in Otokutu, Ughelli South council area.
According to him, Tinubu’s victory was among several other revelations he receive in an encounter with God during a recent sojourn to a prayer mountain.
The cleric prophesied that President Muhammadu Buhari and Omo-Agege will emerge victorious in the 2019 polls.
Emphasising that Nigeria has credible men and women who can govern the country, he added that God had decided to favour the APC flagbearer because of his contribution to humanity.
“I will tell you what God said concerning the 2023 election. Like I prophesied before the APC primary that the man called Jagaban will win and I asked God who is Jagaban, why are you talking about Jagaban?
“The Lord said that he does not look at appearance, but that he looks at acts. That this man ruled Lagos and made Lagos become a better place. That the grace He sees in APC, APC will win the presidency of Nigeria.
“And not only that, he has suffered to make people leaders, He (Lord) promised to make him president. Jagaban has worked for the position. And God has said he must be, against all odds,” he stated.
Speaking further, the Prophet said that the elections will be tough, adding that the “Lord” warns youths to be careful about whom they support as he alone gives “power”.
“God now spoke about Jagaban and I asked, who is he? The Lord said he is just a simple man. He is not looking for money because he already has money. God said he wants to make a name, fame. That he will rule more than President Buhari,” the cleric said.
He further stated that God revealed that though “a good man,” “it is not time” for the presidential candidate of the Labour Party (LP), Mr. Peter Obi to become president.
Top Stories