In his Facebook page on Thursday, FFK posted an old picture of Melaye taking what looked like soaked garri. 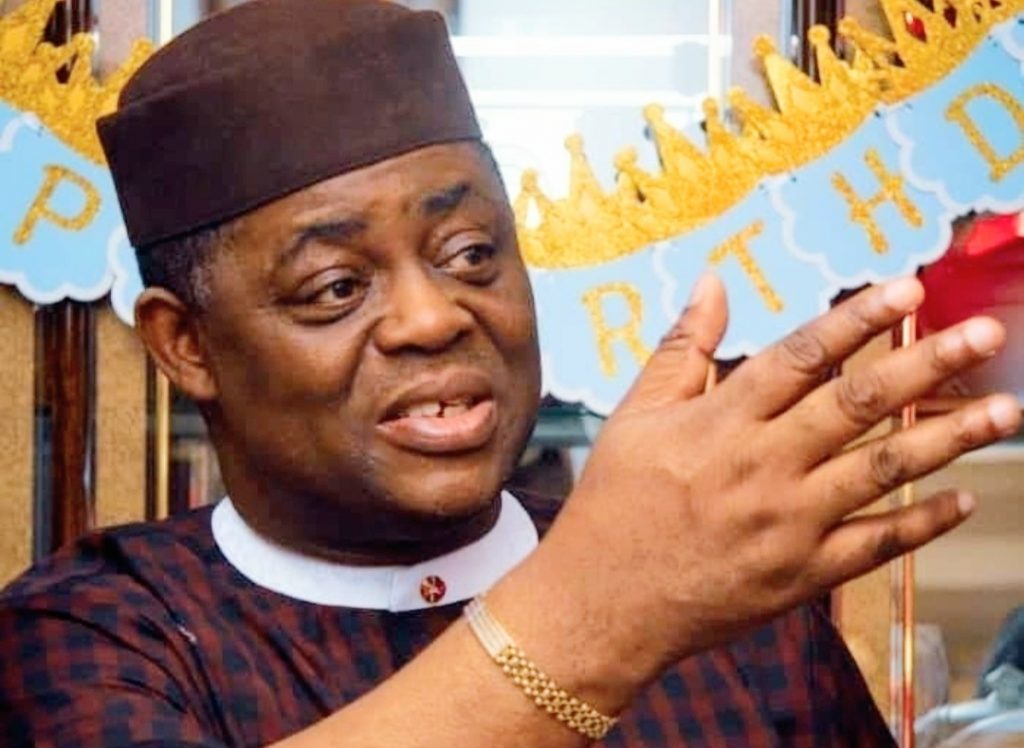 Nigeria's former Minister of Aviation Femi Fani-Kayode has made mockery of Dino Melaye by sharing a photo of him drinking garri.
Dino is the spokesperson for the Atiku Abubakar Campaign Organisation.
The duo have been fighting dirty on social media for some days now.
In his Facebook post, FFK tried to show that Melaye came from a poor background.
In the picture, the former Senator wore a red shirt with a plate of garri in his hand as he looked at the camera.
FFK wrote: “This is Dino Melaye drinking garri when he was still struggling!
“You can take a man out of the jungle but you can’t take the jungle out of a man! This clown is a real jungle, lol.”
The ex-Minister also posted a video of Melaye in 2019 when he was arrested by the police for illegal possession of arms, gun running and alleged sponsoring of hoodlums in Kogi State.
He wrote: “Dino was so terrified of the police and of being detained that he fainted and started bleating like a gut*ted p*g. A grown man, weeping and crying and crawling all over the floor simply because he was arrested.
“I have never seen such wea*ness and cow*rdice. Is this the man that wants to lead the charge for a serious presidential contender? We will eat them for breakfast! No wonder he got upset when I called for his arrest and that of their party Chairman. The idea of the police bundling him again drove him ins*ne and he started to in*ult his elders, betters and those of us that fed him in the past. Say NO to drugs, copr*philia, and sod*my! P.S. Remember what Dan Jay did to you years ago? Let us pray it does not happen to you again.”
This comes about a day after the duo engaged in a war of words over the crisis rocking the Peoples Democratic Party (PDP).
The ex-Minister in a post on his social media handle asked the Federal Government and security agencies to take Melaye up on the statement credited to him on the emergence of Iyorchia Ayu as PDP national chairman.”
Melaye in a chat with journalists recently said all the PDP Governors spent money at the party’s national convention last December to ensure the emergence of the former Senate President as national chairman.
Fani-Kayode also demanded the disqualification of the PDP presidential candidate from the 2023 race.
Reacting, Melaye in a tweet said Fani-Kayode’s comment lacked comprehension.
Responding via his Instagram handle, Fani-Kayode wrote: “What can one say about a par*site of a man that licked the arse of Nasir El Rufai for years, then moved to Bukola Saraki’s, then moved to Yahaya Bello’s, then moved to Nysesom Wike’s and then finally moved to Atiku’s and licked far more than just ar*e.”
Fani-Kayode and Melaye have switched membership of the two main parties in their political careers.
Fani-Kayode is of the All Progressives Congress (APC), while Melaye is a PDP member.
Top Stories