The Partenopei were in devastating form at the Diego Armando Maradona Stadium as they handed Jurgen Klopp’s Liverpool a 4-1 defeat. 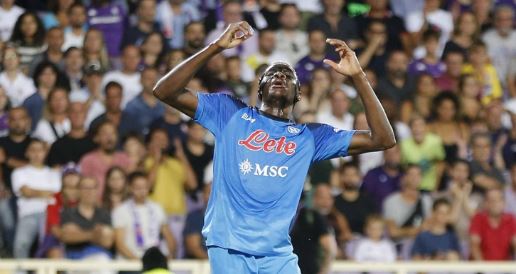 He described Napoli’s demolition of Liverpool in the UEFA Champions League as a bittersweet experience for him.

The Partenopei were in devastating form at the Diego Armando Maradona Stadium as they handed Jurgen Klopp’s Liverpool a 4-1 defeat.

The forward, who passed a late fitness test was named in the starting line-up by manager, Luciano Spalletti.

Osimhen spent 42 minutes on the pitch before he was replaced by Giovanni Simeone due to muscular problem.

The 23-year-old was a thorn in the flesh of Liverpool defenders in the game.

The Nigeria international hit the post in the opening minutes of the game and also missed a penalty.

Osimhen took to social media to celebrate the win, while also lamenting his penalty miss and injury.

“Bittersweet Feeling For Me, Great Performance From The Whole Squad, GOD Is The Greatest...We Move @sscnapoli,” he tweeted.

It remains to be seen whether the striker will be fit for Napoli’s Serie A clash against Spezia this weekend.