Speaking at a Summit organised by the Northern Christian Youth Assembly in Abuja, Okowa said he does not believe in the Muslim-Mulsim ticket of the ruling party. 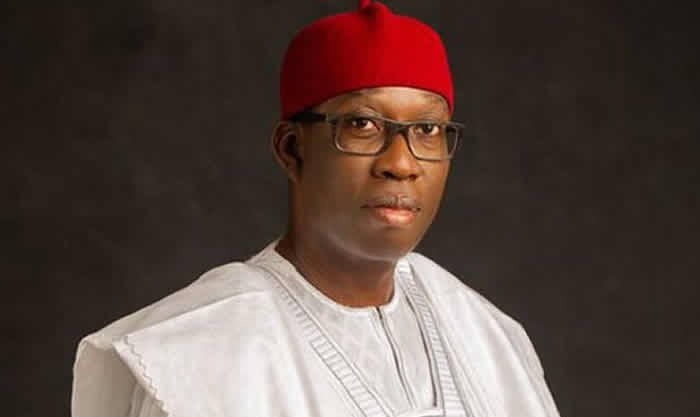 All Progressives Congress (APC) has been lambasted by Governor of Delta State, Ifeanyi Okowa over the controversial Muslim-Muslim ticket.
Okowa spoke at a Summit organised by the Northern Christian Youth Assembly in Abuja, calling the decision insensitive.
According to the governor who is the vice presidential candidate of PDP, he does not believe in the Muslim-Mulsim ticket of the ruling party.
Okowa added that the decision of the ruling APC was the most insensitive decision to make in a country that is diverse.
Okowa asserted that it would be difficult for the APC to win the presidential poll as a result of the ruling party’s decision to field a same-faith ticket.
He said “I personally do not believe in the Muslim-Muslim ticket. The reason is that there is a diversity when it comes to that. Therefore, sticking to one faith is not a good thing to do particularly in a troubled nation as we are in today.
“It’s almost like going on to having the presidential candidate from the North and picking the vice presidential candidate also from the North.
“So, the only ticket that can work for Nigeria is the ticket that doe not tie election victory to either the Muslim or Christian faith.”
Speaking further, Okowa stated that the PDP will be victorious in the 2023 elections because more Nigerians are joining the Atiku/Okowa project.
The PDP vice presidential candidate said that the party would win the 2023 elections with the support of the youths.
He said: “The PDP will win the election because many people have keyed into this project. We are receiving defectors in droves. When we say that the future is for the youth, it is actually from today. But the real truth is, our youths, particularly the youth leaders must be in a position to have a clear understanding so that they are able to guide others aright.
“This is because if you have a leadership that is not able to provide that true leadership of guiding people alright and people begin to think in the wrong way, you create further problems rather than finding solutions; and we go the wrong path.
“We are going to see bullying in the cyberspace of our country. I think that everybody should have his space and time to be able to think and make comments without being bullied. We need to do critical thinking and that is why we are gathered here today.
“The topic for the event is key because it talks about unifying Nigeria. This is instructive because there is strength in our diversity but that will only be when we are able to unite ourselves.”
Top Stories