Judy shared a copy of the film’s manuscript via her Instagram page, noting it was one story that had never been told before in Nollywood’s history. 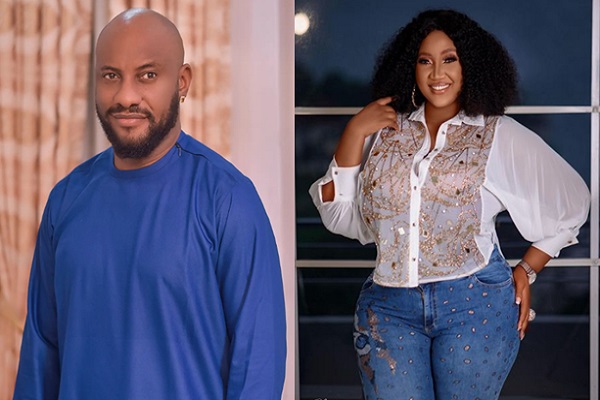 Nigerians have come for Judy Austin after she shared copy of a new movie featuring her hubby, Yul Edochie.
The movie ‘A widow’s story’ which is in the works would be self-produced by Judy with her husband directing.
Judy shared a copy of the film’s manuscript via her Instagram page, noting it was one story that had never been told before in Nollywood’s history.
Excited to be working closely with her beau on the project, the mother of one hailed his ‘Excellency Eze Dike 1’ as ‘the best in the game’.
She wrote: “Day 1 on the production of A WIDOW’S STORY!!! This is a story that has never been told before in the history of Nollywood!!!
“It’s such a privilege to be producing this MASTERPIECE and with the best in the game directing it… His Excellency Eze Dike1 @yuledochie.
“Executive Producer: @munmediaentertainment. I can’t wait for you guys to see what we’re cooking!!!”
Reacting to the post, her hubby also hailed and wished her the best of luck.
He wrote: “Baddest detailed producer. Best of luck.”
But social media followers reacted differently to the development.
They swarmed to Judy’s post comment section to leave varying opinions.
cindy_lumlum said: “Husband and wife…baby no. 2 coming!….if u are mad go and attack Ned Nwoko and his 5th wife Regina Daniels too.”
abbas.daughter_ wrote: “@judyaustin1 it is one thing to consciously walk into somebody’s family when the wife has made it known she doesn’t believe in polygamy. The disgrace and tears you have cost a fellow woman is sure to come back to you. You had better ask GOD that you like to talk about so much to show you mercy. Regret is coming for you and Yul. You are a WICKED human being. EVIL!!! Evil people are restless unless they’re making trouble; They can’t get a good night’s sleep unless they’ve made life miserable for somebody.
Proverbs 4:16-17 MSG GOD will judge and fix you and @yuledochie. Not for the sin but for the arrogance and unrepentant heart. I pity you!!!
am_kate10 stated: “@yuledochie ingore them until they become a fan. @judyaustin1 your clam is worth emulating… I am learning…indeed u are peaceful n intelligent… cheap runs girls calling u names? Is indeed laughable… did u steal there broke father’s? Enjoy ur marriage in peace n step up ur game.”
asomughannamdi said: “Please someone should tell May Yul Edochie to stop disturbing us. Yul has a second wife who deserves to be loved like any other married woman. If this is not acceptable to May, she can opt out & allow us to concentrate biko.”
elizee3286 wrote: “Go girl! You and hubby are a great team. God bless you both abundantly. Please enjoy your marriage and forget haters.”
kumsilulu stated: “You act produce for years and still didn’t blow, you knack person husband to blow yet your page is blow 300k followers.”
kelpearl said: “All this people waiting for her post to insult her, like are you not tired. She doesn’t even care. You are all so depressed and this is the only place you can vent. Did she steal your husbands or fathers?”
braidsandbeauty22 wrote: “Congratulations. I watched some of your movies and really enjoyed your acting.”
hopeomo82 stated: “All you could do is to open your legs for Yuledochie after directing your movie because that is the only way to show your appreciation and pay him. This is so shameful.”
Iamspizy said: “This too Much closeness with Eze Dike 1 @yuledochie nah waoo ….Baby2 will soon be on the way……Anyway, I wish u guys a successful shooting….”
Prinzofcambodia wrote: “It’s not just about acting and co-producing film with Yul. U guys might think that u people have arrived or u guys share same passion and vision buh be reminded that it won’t last. May’s children are watching and ur kids are watching too. The future will tell the doom u people have created. Enjoy while it lasts. Highest from 10yrs to come u people will start receiving the repercussions.”
Joanetimbuk stated: “Most of you claiming May should leave the marriage.. what more do you want to hear, her boldly coming out to say she doesn’t want to be numbered and not wanting to be in a polygamous marriage has said it all. Please don’t just read, always read in between the lines. Since she doesn’t want to be numbered what stops Yul from divorcing her himself. He is the one sitting on the fence. He has been given an option to chpose so he should make his choice. As per the house, that house belongs to May and her Children. If Yul and Judy are making so much money then they should go and get their own house for their own kids. Simple. Now let me shock you. Yul will never ever leave May for Judy. Minus Movies from Yul and Judy’s life, they are both nothing.”
Ngobekeei said: “Hope you are not planning to kill May. You have acted second wife now is the widows.”
Top Stories