Gay Anglican priest, Jide Macaulay has celebrated his second anniversary as a priest. 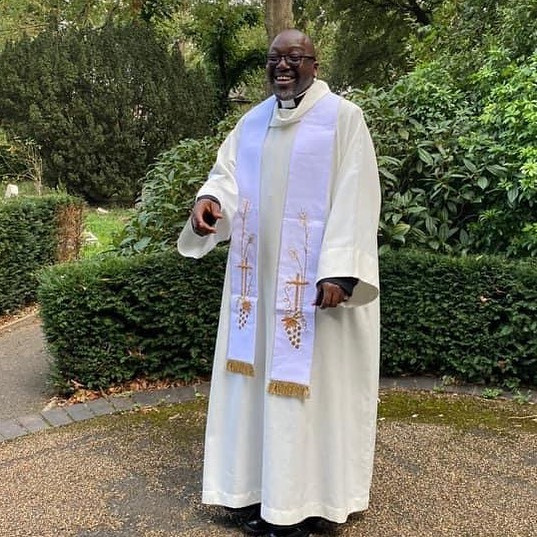 British-Nigerian priest, Jide Macaulay is in celebratory mood.
The openly gay cleric took to his social media page to celebrate his second anniversary as an Anglican priest.
The cleric, who described himself as the "ordained homos3xual that God loves" took to Instagram on Monday, September 26, to share his ''gruelling journey to priesthood; the trials, media attack, emotional, psychological abuse, racism and homophobia he faced for many years.''
"Today, I celebrate with thanksgiving my second anniversary to Anglican priesthood," he wrote.
"Too often we wait on God in expectation. We are forced to wait for our own safety and forced to wait because there is danger and harmful elements in the way. We are forced to wait for our own maturity.
Some things are settled by God a long time ago, we must learn to wait. I learnt to wait on God even at times when I doubted and was mad at God.
I have so much faith in God who never changes their mind in matters concerning me.
When I was ordained deacon in 2013, I was faced with barrages of hatred from within and outside the church. The media in my home country Nigeria vilified me and exposed me to dangers that I never anticipated. I have not returned to the country since 2012.
After the diaconate, it’s expected priesthood would have been the following year. But many events happened that caused me to step aside from my ministerial post at the time. My mother had died about 6 weeks after my ordination and the sorrow of her loss was too intense for me
I was in a difficult situation for several years, going through the wilderness of anxieties and facing many attacks I describe as spiritual darkness, religious abuse and wickedness in high places. I had developed chronic anxieties and depression, leading to high blood pressure.
I had faced years of racism, xenophobia, malicious acts, homophobia and stigmatisation by the Christian communities I trusted. But in all I laid it at the feet of Jesus in my lamentation.
The attacks were not just by strangers, who called for me to be executed, the death threats offline, online and in the media. But also some Christians, some Anglicans, family members attacked me verbally , emotionally and psychologically, they did so much to torment me and do everything to destroy me.
Each time I turned to the church at both parish and diocesan level, I was denied, silenced, the rejection was et tu brute.
I am the ordained homos3xual that God loves. This might be difficult for many but it’s been the joy of my life to serve God.
In all of this God is faithful. I am thankful that I surrounded myself with people who reminded me of my worth and validated my existence and ministry.
Today, is not about regrets but a reminder that the stones the builders rejected proudly becomes the cornerstone.
Congrats Jide for your journey to priesthood. Happy 2nd anniversary."
Top Stories