The drones were imported by individuals and organisations without an End User Certificate. 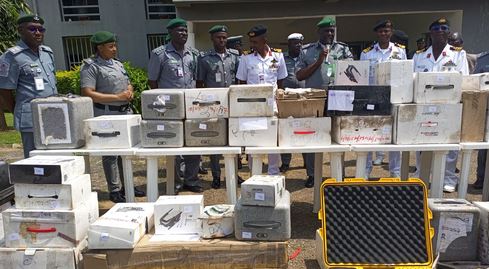 Over 86 drones intercepted by the Nigerian Customs Service has been handed over to the Navy on Tuesday, October 11.

The drones were those imported by individuals and organisations without an End User Certificate.

Speaking while presenting the drones to the Navy at the  FCT’s Command warehouse, the Comptroller General of Customs, Col Hameed Ali (retd.), said the drones were intercepted at the Nnamdi Azikiwe International Airport and were subsequently forfeited to the government.

Represented by the Comptroller, FCT Command, Sulaimon Bomoi, Ali said the drones were presented to the Navy to further cement the agency’s relationship with others security agencies in the country.

“We intercepted it from Nnamdi Azikiwe International Airport and we seized it. We went to the court to get the condemnation order. So at this point I’m directed by the CG to hand over 86 pieces of drones to the Nigerian Navy as part of the cooperation and synergy among the security agencies.

Receiving the drones on behalf of the Nigerian Navy, the the Chief of Training and Operations, Rear Admiral Solomon Aagada, promised that the drones would be put to good use.