Residents could pay as high as N100,000, with minimum payment of N5,000 for two weeks and could pay additional N100,000 as penalty per week if such posters are not removed after the burial or function. 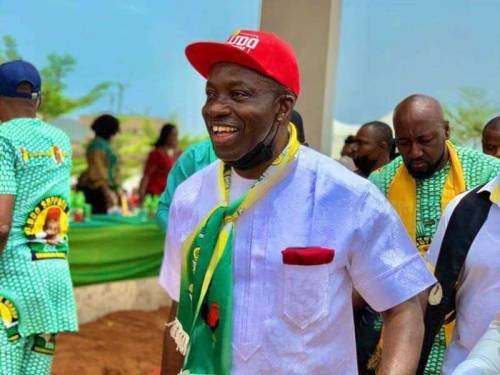 According to a report by SaharaReporters, the Anambra state government has imposed levies on burial posters, wedding and church banners.

Residents could pay as high as N100,000, with minimum payment of N5,000 for two weeks and could pay additional N100,000 as penalty per week if such posters are not removed after the burial or function.

This is contained in a letter to the National President, Anambra State Association of Town Unions (ASATU), titled: "Regulation of Ceremonial Adverts," which was signed by the Managing Director and Chief Executive Officer, Anambra State Signage and Advertisement Agency (ANSAA), Tony Ujubuonu.

Implementation of the new regulation, according to Ujubuonu, starts from November 1, 2022, adding that the regulation is in line with Governor Chukwuma Soludo’s aim of building a smart state.

The letter partly read, "The Anambra State Signage and Advertisement Agency was created by Anambra State Government and signed into law on September 16th 2010, for the purpose of regulating the use of out-of-home structures, control outdoor structures to be used for signages and advertisements, issue licenses and permits for the construction and placement of outdoor structures in any part of the State, protect the environment from potential adverse impact from visual blights, restoring beauty to our environment and collecting appropriate revenues.

"The Agency, in fulfillment of its statutory obligation, is not unmindful of the menace associated with non-commercial adverts that have literally occupied our out-of-home space. These adverts come in the form of obituary, religious, wedding and sundry flex, banners and posters. These materials tend to deface the environment and pose a threat to the aesthetics of our communities.

"In line with Mr. Governor’s avowed aim of building a prosperous, livable and smart city state in Anambra, the Agency sees the need to regulate the use of these materials in manners that are decent and orderly.

"Because this is a phenomenon that is associated with all the communities and villages in Anambra State, we hope to administer this process in partnership with the Town Unions.

"It is our wish that the Town Union will take up the responsibility of informing the villages, hamlets, kindreds, churches and any such bodies within their towns that from the 1st of November, 2022, the Agency will begin the enforcement and collection of levies on all such posters and flex used for any of such ceremonies.

"Note that Directional Signs leading to the venue which can come in 1x 2ft size will not be charged. It is also important to bear in mind that after the duration of this period, any such board that is left standing will attract a penalty in the sum of the amount initially paid. This penalty is paid weekly."

Ujubuonu, however, charged the President Generals of Town Union to ensure they implement the decision of government, adding, "we have written to you because we have always regarded you as progress partners in the development of Anambra State."