The suspects were arrested in Ikeja and Ikoyi on Sunday, November 6, 2022. 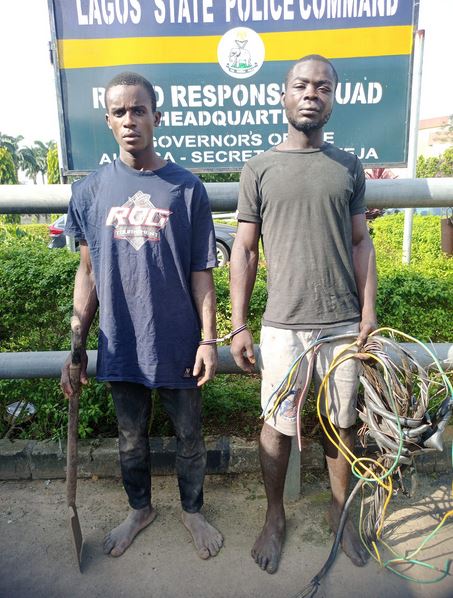 Two suspected cable vandals have been apprehended by men of the Rapid Response Squad (RRS) of the Lagos State Police Command in different parts of the state.

The suspects, Akpan Fortune,28, and Stanley Umebuane,24, were arrested in Ikeja and Ikoyi on Sunday, November 6, 2022.

Spokesperson of the command, SP Benjamin Hundeyin, in a statement on Monday, said Fortune was arrested in the morning on Acme Crescent, Agidingbi, Ikeja after accessing and vandalizing telecommunication and generator cables in a substation in the area.

Umebuane on his part was caught in the act by an RRS team on routine patrol on Sunday night November 6, at Gerrard Road, Ikoyi, digging up electricity cables with a shovel.

Recovered from them were a shovel and different types of vandalized cables.