PDP Crisis: I Share Something In Common With G5 Governors – Bala Mohammed


He stated that he feels fulfilled having the G-5 governors behind him. 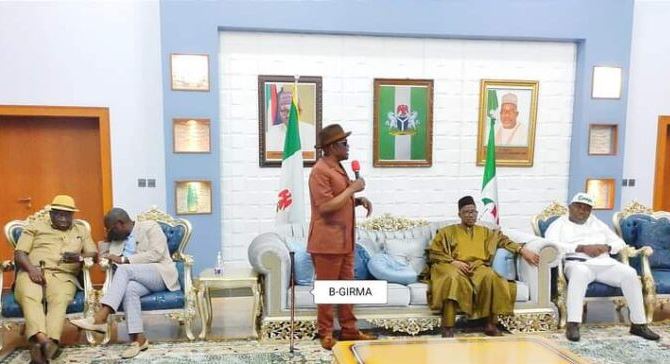 The G5 Governors which comprises of Nyesom Wike of Rivers state, Samuel Ortom of Benue State, Seyi Makinde of Oyo State, Okezie Ipeazu of Abia State and Ifeanyi Ugwuanyi of Enugu State, are not in good term with the presidential candidate of the Peoples Democratic Party (PDP), Atiku Abubakar.

Speaking after a closed-door meeting with the Governors, Bala said;

“The governors of G5, they called themselves ‘Integrity Group’. I am supposed to be with them but they excommunicated me for some reason best known to them. But I am highly connected with them, each and every one of them. There is no day that I don’t call to speak with each of them.

“Because in politics, you go with the people that you share something in common with. The presidency that we ran where my brother was defeated and he defeated me has brought us close. Of course, at the Governors’ forum, one thing I appreciate about them is that they look at your challenges. Even though they are not running for a second term, they are always worried.

“We have something in common. They know that I have challenges of anti-party, challenges of some treachery and mischief and of course politics is about all these but when you know that you have people behind you, of that stature and that calibre you feel fulfilled.”