Speaking during the protest, the chairman of ASUU, NDU, Prof. Tonbara Kingdom, condemned the payment of half salaries to lecturers in federal varsities. 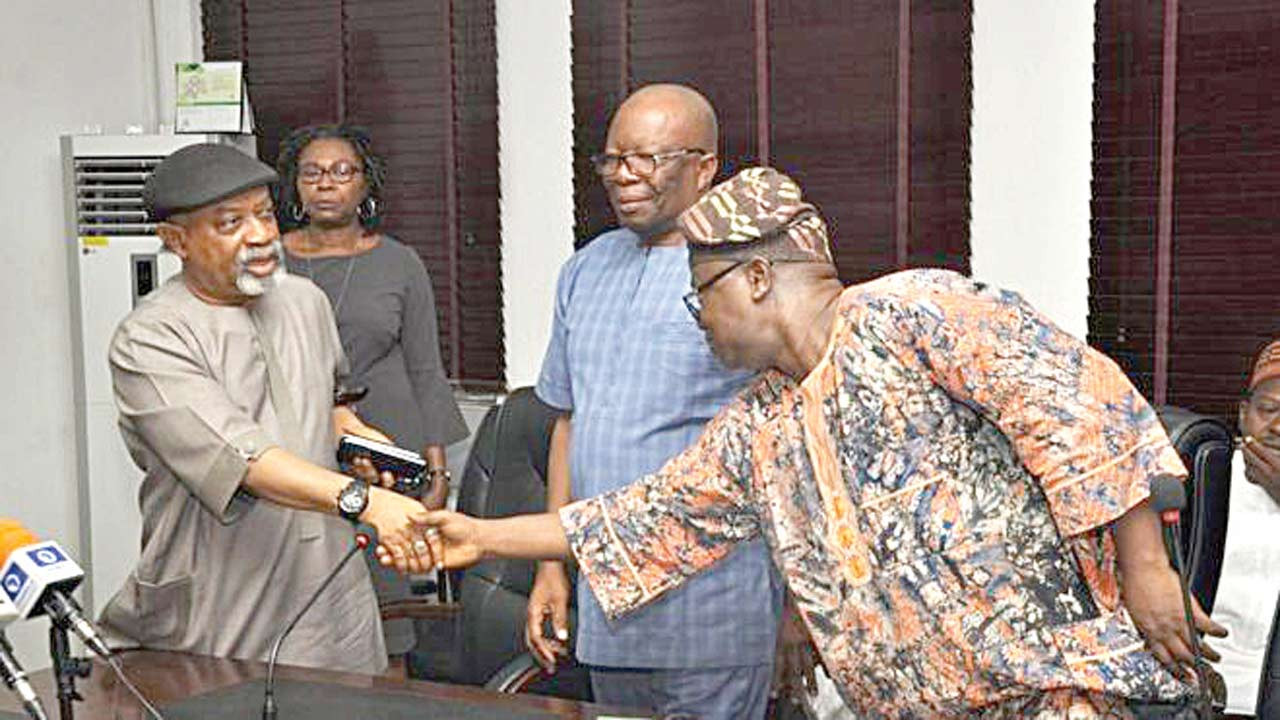 The Academic Staff Union of Universities, Niger Delta University chapter has called for the sack of the ministers of Education; Labour & Employment, and Finance, Budget and National Planning; Adamu Adamu, Chris Ngige and Zainab Ahmed.
The union made the call on Monday after staging a peaceful solidarity protest in Yenagoa against the “casualisation of university lecturers and bastardisation of tertiary education in Nigeria” by the government.
The lecturers called on the President Muhammadu Buhari to sack the ministers over alleged poor performance in office.
The march was preceded by “a special congress” of ASUU NDU held at the Law Faculty Campus of the university, which was attended in solidarity by representatives of the Nigeria Labour Congress, Environmental Rights Action/Friends of the Earth Nigeria, Civil Liberties Organisation, National Association of Nigeria Nurses and Midwives, students, among other activists.
Some of the placards displayed by the aggrieved lecturers had inscriptions such as, “The Children of the Poor Have Right to University Education, “Federal and State Governments Should Not Kill Public Universities in Nigeria”, “Stop Proliferation of Universities Without Funding”, and “Bayelsa State Government Should Fund NDU Adequately”.
Speaking during the protest, the chairman of ASUU, NDU, Prof. Tonbara Kingdom, condemned the payment of half salaries to lecturers in federal varsities.
He stressed that the union in the Bayelsa State-owned institution was totally opposed to the casualisation of academics and bastardisation of higher education in the country.
According to him, the federal and state governments were systemically killing public universities with inadequate funding and proliferation of institutions in order to create the conditions for private universities to thrive and deny the children of the poor, access to university education.
Tonbara, who led the protest, said, “This rally is part of ASUU national struggle.  The children of the poor must attend universities. A people united cannot be divided. The people, ASUU, civil society are all here to say they are in support of the struggle of ASUU. Forward ever, backward never.
“We will never surrender. A people united cannot be defeated. We will not go back, we are going forward. Federal Government should look for a way to solve this problem. The sacking of Ngige and the Minister of Education is necessary. They must go. If they cannot solve this problem, they must go. The Minister of Finance must go.
“How can the Accountant-General take instruction from the Minister of Labour and pay our colleagues half salaries? It is unacceptable. So, ASUU NDU is insisting, ‘pay them their monies’. We are not casuals, and we will not accept half-pay. Solidarity forever.”
In their separate solidarity messages, the state chairman of the NLC, John Ndiomu, represented by the state secretary, James Adama; state chairman of the CLO, Nengi James; Head of ERA/FoEN in Bayelsa State, Alagoa Morris; and the state chairman of NANNM, Sonia Andabai, unanimously expressed support for the struggle of ASUU.
They described strike as legal and declared “no to casualisation of academics and bastardisation of university education in the country”, adding that “what ASUU is doing today is in defence of the survival of public universities.”
Top Stories