Nigerian international striker Victor Osimhen has previously been linked with a move to England. Manchester United were believed to have been on a list of interested clubs that also included Liverpool and Arsenal. 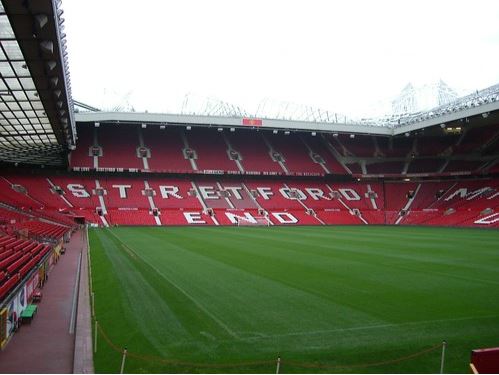 "Old Trafford, Manchester" (CC BY 2.0) by Sean MacEntee
While few, if any players could cover a hole left by the great Cristiano Ronaldo, it’s clear that Manchester United will need to do some transfer business.
The English Premier League side have a vacancy within the squad following the Portuguese international’s departure and they may turn to a former target in the hope of filling it.
Nigerian international striker Victor Osimhen has previously been linked with a move to England. Manchester United were believed to have been on a list of interested clubs that also included Liverpool and Arsenal.
Osimhen in Demand
With Ronaldo gone, it’s being reported that Manchester United will go back in for Victor Osimhen when the European transfer window opens again in January. United are a big spending club, but could a potential stumbling block involve the reported fee?
Osimhen currently plays his football in Italy with Serie A side Napoli. His current employers are clearly aware of his value as it’s claimed that a fee of around £87 million GBP will be needed to prise him away.
That’s a significant sum, but Manchester United may feel that they have to move in an attempt to hit their targets at the end of the current season.
United’s Focus
As English Premier League teams went into the World Cup break, Manchester United sat in fifth place, on the brink of the Champions League positions. It represents a fine recovery for the Red Devils under Ten Hag after the team lost their first two games of the season.
While a title tilt may be out of the question, United should be targeting that top four finish and a place in Europe’s elite club competition. There is some support for that quest with Asian bookmakers making Manchester United joint fourth favourites in their top four betting markets.
Using odds from Thailand, Manchester City, Arsenal and Liverpool lead the way while United and Spurs share that fourth place. The best online sports betting, known in Thai as พนันกีฬาออนไลน์, in Thailand and their odds are reflected across the world.
The Asiabet website sources those odds and they are subject to change for the remainder of the EPL season. As soon as any updates come in, the markets will adjust and readers can study these, along with breaking news and opinion articles.
It’s also possible to get directly involved, with each of those sportsbooks ready to take on new customers. All bookmakers on the Asiabet panel are available in their country of origin but they will also accept global account holders.
Upon receipt of a completed registration form, there is likely to be a welcome promotion, while many outlets publish ongoing bonuses moving forward. Other benefits include a choice of funding providers, efficient customer service and a wide selection of alternative sports.
It’s the one-stop shop for football betting, but would Manchester United’s top four chances be boosted by a move for Victor Osimhen in January?
Victor’s Qualities
Goals are a special quality and Victor Osimhen has produced plenty of them throughout his career. At the age of 23, he’s already featured for four club sides in Europe and he has a respectable scoring record throughout.
The Nigerian international really made a mark at his previous club Lille. He spent just one season in France where 18 goals in 38 games, across all competitions, led to that big money move to Napoli in 2020.
Serie A can be a tough, defensive league, but Osimhen has continued to thrive in Italy. Prior to the 2022 World Cup break, the striker had scored 38 goals in 76 matches at a ratio of exactly one every two games.
Will Victor Osimhen move in January?
Prolific strikers come at a premium. United have been quoted that significant price tag but should that put them off, when we consider that exceptional record? The club has struggled to find a productive centre forward since Romelu Lukaku left for Inter Milan and there is certainly a gap to fill.
January is traditionally a quieter transfer window, but the departure of Cristiano Ronaldo could hasten a bid for this Nigerian international. Manchester United would likely be a dream destination for the player and Victor Osimhen to Old Trafford appears to be one of the most plausible transfer rumours right now.
Top Stories