Deborah recounted working as a house help for her cousin and hawking in the city to make ends meet. 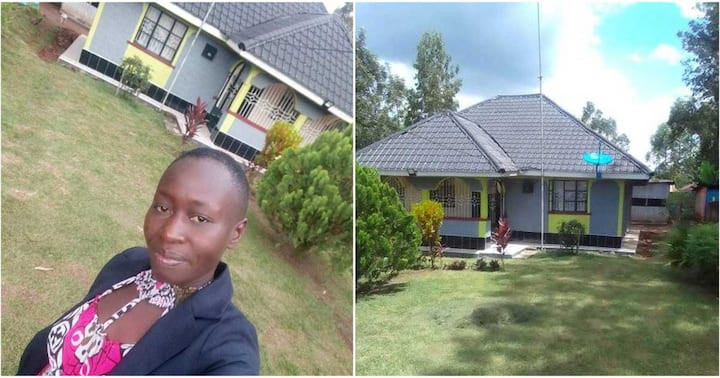 A former househelp has taken to social media to flaunt the house she built.
Deborah Odari said she built the house in Mumias, Kakamega county, Kenya.
Speaking to TUKO.co.ke, she narrated her journey from a house help to finally owning a home, which she dubbed her little palace.
Deborah recounted working as a house help for her cousin and hawking in the city to make ends meet.
"I worked as a house girl to my cousin at Ongata Rongai. I did hawking for two months. I decided to be house girl at Kariobangi, got a salary and picked up my secretarial certificate before returning to Kayole," she said.
Deborah then pursued a diploma course in early childhood development education.
“I later joined Bridge International Academies and did a diploma in ECDE part-time at Halisi College Kayole.
She was eventually employed by the county government, marking a change in her fortunes.
“The invisible and visible scars God healed. He wiped my tears and he's steering me to my destiny. It's God. God bless my friends."
Deborah further disclosed that she baked brick with her brother to build the house.
“I sold extra bricks to buy sand and ballast. For the windows and grills I bought the materislas and my cousin Andrew made it,"
Deborah said that she spent KSh 190,000 on the iron sheets and built the house in bits together with her husband.
Top Stories

Musician Brutalised By APC Thugs, Risks Losing One Eye For Refusing To Compose Song For Campaign In Ebonyi
Popular Stories