The video clip was an extract from the APC presidential campaign rally in Kaduna. 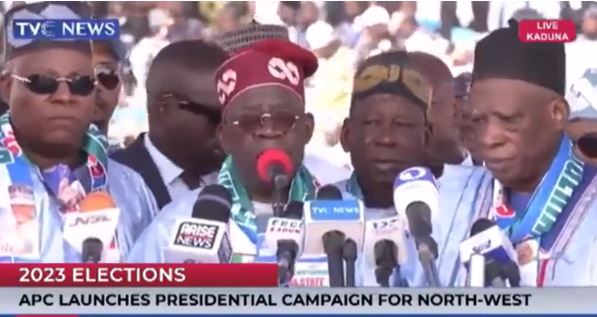 Nigerians have taken to social media to react after a video of Bola Tinubu, the presidential candidate of the All Progressives Congress' attempt to recite the Muslim prayer failed.
The incident happened during the APC presidential campaign rally in Kaduna.
At the event, Tinubu tried to recite prayers the Muslim way, but could not rightly translate the arabic to English.
Also, social media users spotted the straight face of his running mate, Senator Kashim Shettima during the encounter.
See some of the reactions and video below:
@OlusholaBabalo1: “I think a lot of people are against Tinubu winning because of shettima,”
@DavidBaloguns: “Tinubu is an ordinarily placeholder for Shettima. They know he can not go beyond 1st round. That is why they are pushing him.
“And Shettima is a placeholder for boko boys.
@rue_you_mtf: “Shetimah is never a happy man…He looks like someone with some sinister intent in his heart.
@diamonddemola: “This is what I keep telling people. The dude’s entire family is Christian. He doesn’t even pray as a Muslim. He just retain Muslim name. But truth be told, the man should just go and enjoy old age at home. The embarrassment is getting out of hands.
@wasleey_ng: “He was only trying to translate what he said in Arabic into English. And he couldn’t even do that,”
He was meant to say; “In the Name of God, the Magnificent, the Merciful.
That’s what he found difficult to say. He was not trying to pray in the Christian way.
@CUPSYLAR: “You sure say this man no dey use this presidential campaign for popularity? Like what’s this ? Tinubu no get religion oooo. That man is a one man gang person….Tinubu is just a clown.
@AdeyemoSulaimon: “This Shettima lasan ehn!! Make him dey smile small small na.”
@Aaleem95: “All these just to bring in supporters. Muslim-Muslim ticket they say. Astagfirllah, this type of Muslim is fake.”
Top Stories