Alabi and his colleagues were said to be at a park close to the Sabo Market when the policemen arrived to impound motorcycles from riders operating against the ban on motorcycle operations in the state. 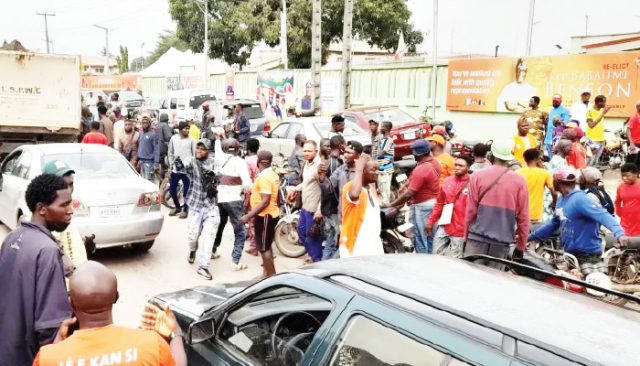 A motorcyclist, Stephen Alabi, aka Doctor, has been reportedly shot dead by police officers attached to the Lagos State Police command.
Punch reported that the incident happened at Sabo Market, in the Ikorodu area of the state.
Alabi and his colleagues were said to be at a park close to the Sabo Market when the policemen arrived to impound motorcycles from riders operating against the ban on motorcycle operations in the state.
A motorcyclist, Olawale Olawuwo, while speaking with Punch, said the policemen were attempting to seize a bike from his colleague when Alabi intervened, adding that one of the policemen shot him.
Olawuwo said, “The incident happened on Thursday; motorcyclists were at our park at the front gate of the Sabo Market when policemen stormed the premises to impound motorcycles. They were about seizing a bike from a motorcyclist when the deceased met them at the front gate of the market around 3pm.
“Alabi was trying to settle the matter between the motorcyclist and the policemen when one of the cops cocked his gun and started shooting; one of the stray bullets hit Alabi.
“We don’t know why the policemen started shooting; we attempted going to the Sagamu Road Police Station, but we were told that the policemen at the station would detain us if we went there because the policeman responsible for the bullet that struck Alabi was from the station.”
Another motorcyclist, who gave his name simply as Adam, while lamenting the incident, said immediately Alabi was shot, he was rushed to the Ikorodu General Hospital but was rejected, adding that he died while receiving treatment at a private hospital.
“We want the government to help us; Stephen is dead,” he added.
PUNCH Metro gathered that colleagues of the deceased staged a demonstration and blocked the Ebute-Igbogbo Road to express their grievances on Saturday.
Speaking during the protest, a motorcyclist, who gave his name only as Tobender for security reasons, confirmed that the police were enforcing the ban on motorcycle operations when Alabi was killed.
He said, “The policemen arrested me on Ojubode Road in Ikorodu, seized my motorcycle from 8am till 5pm when they released it after collecting N10,500. There are a lot of traffic robbers at the Garage Roundabout but the police do not arrest them. But the police go after those who use motorcycles to feed their families. If we complain, the police usually say Lagos does not want Okada and yet we pay for tickets.”
However, the state Police Public Relations Officer, Benjamin Hundeyin, in another narrative, said a mob attacked a police patrol team on the false belief that the team was responsible for an accident involving a motorcycle and a tricycle in the area, which led to the shooting.
“Investigation is ongoing to unravel all the facts behind the shooting,” he added.
The police have been accused of shooting motorcycle riders during enforcement of the ban on their operations in certain parts of Lagos State.
A few months ago, a security guard, Koleosho Abayomi, demanded justice after accusing a policeman of shooting him in the thigh at the Lekki Peninsula Scheme II, in the Eti Osa Local Government Area of Lagos State.
Abayomi, who was bedridden due to the injuries he sustained during the attack, said the policemen were enforcing the ban on motorcycle operations when the incident happened.
Top Stories