The victim’s father, Johnbest Okolie, said after the daughter had told him what happened, he now left angrily to trace Tony to the house. 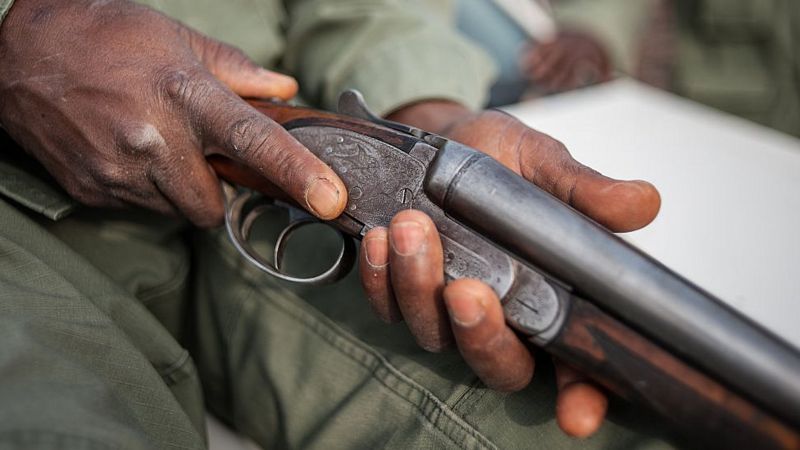 A member of the anti-cult group in Issele-Azagba, Aniocha North Local Government Area of Delta State, Mr Tony Ukwamedua has reportedly r3ped a 15-year-old girl, according to a report by Punch.
It was gathered that the victim had gone to look for her brothers, who went to buy something at the house around 9pm, only to be missing, but later found in a pool of blood around 1am the following morning.
Narrating her ordeal, the victim said, “I went to look for my brothers when Uncle Tony met me and asked where I was going. I told him I was looking for my brothers who came out to buy something. He asked me to join him on his bike to trace them further.
“Instead of going up, he drove straight to the brother’s guest house around the market. I told him, ‘uncle, this is not where you should bring me, allow me to go, my parents must be looking for me too.
“Nobody was sighted around when he brought me inside the guest house and was asking me if I was a virgin. I told him yes. He said I should not worry that he wants to have s3x with me, that he would use two condoms together to penetrate well.
“I was crying and begging him to allow me to go. He now turned my hands back and pushed me on the bed. He covered my mouth and forced me n3ked and started r3ping me.
“When he finished, I was bleeding and crying; he now brought water and asked me to wash up. He forced N5,000 into my hand and asked me not to tell anybody. When I managed to get home, I told my daddy what Uncle Tony did.”
The victim’s father, Johnbest Okolie, said after the daughter had told him what happened, he now left angrily to trace Tony to the house.
“The r3pist who has no remorse was bold to chase me with gun. Thank God for my two sons who also came along with me. They held him down, collected the gun and he escaped while being beaten.
“I took the gun to our palace and handed it over to the Obi of Issele-Azagba. Early that morning, not knowing what to do, I was directed to take my daughter to a private clinic for treatment.
“She was given injection, drip and some drugs. But throughout that day and the next morning, she was still bleeding before somebody directed me to bring her to Asaba Specialist Hospital where government handles cases of s3xual assault.
“I thank God that we came here; since morning, it has been one medical examination and the other. We received the best of cooperation. The Child’s Rights Committee people assured me that the government will handle everything regarding her comprehensive tests and treatments.
“I want this animal in human nature to pay for what he did to my innocent daughter. I have nobody; I am just a poor farmer struggling to take care of my children. I need justice for this little child. Tony has just destroyed her life,” he said.
In a telephone conversation, the Chairman of Delta State Child’s Rights Implementation Committee, Mrs. Kevwe Agas confirmed the incident, adding that proper medical, legal and security documentation would be made to prosecute the case.
She affirmed that justice must definitely be served to serve as deterrent to irresponsible men who prey on the vulnerability of the Girl Child to defile or r3pe her.
Top Stories