A girl escaped being kidnapped by an unknown man after the sad encounter was recorded on tape. 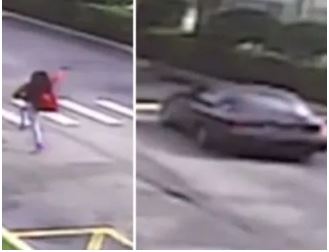 Scene of the encounter
A video has shown the moment a young girl was seen running and screaming as a driver tried to force her into his car.
In a chilling video shared online, the child, believed to be about 11 or 12 years old, is seen darting across the camera frame in a bid to attract attention after being followed home from school last Thursday.
She finally succeeded in attracting the attention of other drivers at her family’s apartment complex in Orange County, Florida, before the creepy driver drove off at high speed.
The girl who did not want to be identified, told WESH2: "It’s just shocking because if I didn’t do (anything), if I didn’t run or anything, he probably would have gotten out of the car and probably grabbed me."
Narrating how the man tried to lure her into his car, she said: "He’s like, old looking, and he has a camera in his hand and he’s smiling at me and telling, with his finger, telling me to come here."
When she ran from him, he chased her with his car.
She said: "I run and he’s still following me, and when he’s still following me, I’m about over there, and I’m running and crying and screaming, 'Help me,' so someone could come and stuff."
A passer-by eventually came to her rescue just before the man who had been pestering her drove off.
Her mother, terrified by what happened, said: "It’s a parent’s worst nightmare to see something like that, and to know that there’s people out there watching children like that, to try to take them or do whatever they want to do with them."
Watch the shocking video below:
Top Stories