The stalemate forced both teams into a penalty shoot-out where the Super Falcons converted all their kicks and a missed effort denied the hosts glory. 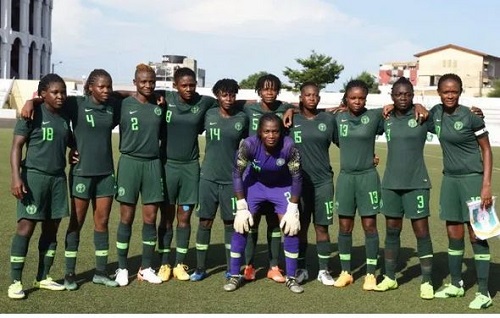 Super Falcons
The Super Falcons won the 2019 WAFU Women’s Cup on Saturday in Abidjan after defeating hosts Cote d’Ivoire 5-4 on penalty kicks.
Nigeria’s woman football team players pose before a match between Niger and Nigeria in the second West African Football Union (WAFU) zone B women’s tournament at The Parcs des Sports in Abidjan on May 11, 2019. (Photo AFP)

Both sides went into a penalty shootout after a 1-1 draw in the game played at the Stade Robert Champroux de Macory.

The Super Falcons had advanced into the final match following their triumph over 2018 winners Ghana via penalty kicks shoot-out on Thursday.

The Ivorians, who were last year’s finalists, had defeated Mali 2-1 in the competition’s second semi-final match to secure a back-to-back final spot.

The Ivorians dominated proceedings in the opening minutes of the encounter but failed to find the back of the net until the 42nd minute.

That was when Ange Koko Nguessan’s free-kick broke the deadlock.

Cote d’Ivoire held on to the lead in the second half with the hopes of lifting the regional title on home soil.

But Uchenna Kanu’s equaliser in the closing stages of the game put the hosts’ celebrations on hold.

The stalemate forced both teams into a penalty shoot-out where the Super Falcons converted all their kicks and a missed effort denied the hosts glory.

Aside her team’s success, Kanu ended the competition as the top scorer, after scoring 10 goals in five games for the Super Falcons.

Following the triumph in Abidjan, Nigeria will return to Abuja on Sunday as they shift focus to the FIFA Women’s World Cup, starting in France next month.

The 2019 FIFA Women’s World Cup will be the eighth edition of the competition.

The competition is for the women’s national teams of the member-associations of the Fédération Internationale de Football Association (FIFA) and it will hold from June 7 to July 7 in France.