The Brazilian midfielder was signed for big money in the summer of 2018 and concedes that his debut campaign was a disappointment all round. 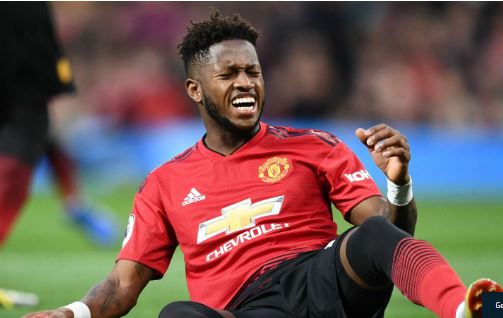 Fred
Fred admits his debut campaign at Manchester United was “difficult”, but a man signed for £52 million ($65m) is expecting an improvement across the board at Old Trafford next season.
The Red Devils invested heavily in the Brazil international during the summer of 2018.
Rival interest was fended off to bring him to England from Shakhtar Donetsk, with big things expected of the 26-year-old. Fred was, however, to suffer the same inconsistency issues as many of those around him and found himself slipping down the pecking order as a result.
He believes that signs of encouragement were offered towards the end of the campaign, but concedes that his time with United has not gone as he had hoped.
Fred told the club’s official website: “Last season, my first one here, was difficult, but I think I ended the season off okay, and I hope next season will be really good for me and a lot better for Manchester United, and I am excited to be a part of that.
“The English league is difficult and has lots of big clubs but I think the derbies are the best games to play so, when we see the fixture list, we look at those games first.
“It’s hard to pick out a single team, because there are so many big games here in the Premier League, obviously there are the top teams like Liverpool, City, Chelsea, I think those big games, the ‘big six’ are always good. We always look forward to them, we all want to be on the pitch and to win them.”
Fred was by no means the only United player to fall short of expectations in 2018-19.
Ole Gunnar Solskjaer is having to oversee another rebuilding project as a result.
The hope is that a return to form will be enjoyed in 2019-20, with Fred confident that the Red Devils will be more competitive as a collective.
He said: “We have a few things to improve; we were not happy with how last season finished. “Unfortunately we couldn’t go a little further in the Champions League and in the other cups, and we didn’t do as well as we wanted in the league, so I think there are things we need to improve.
“As a team, we will discuss what went wrong so that we can have a better season and challenge for trophies. That’s what we all, and the fans, want the most!”
Fred added: “I want to say that next season we will be better.
“We will be looking to challenge for trophies.
“We are Manchester United and we have to be ready to battle for every trophy, and I’m sure that we will have a successful season with the fans’ fantastic support.”
Top Stories