Ousmane Dembele Is Free To Join Liverpool On One Condition


France attacker, Ousmane Dembele is free to move to England to play for Liverpool as long as his price tag is paid. 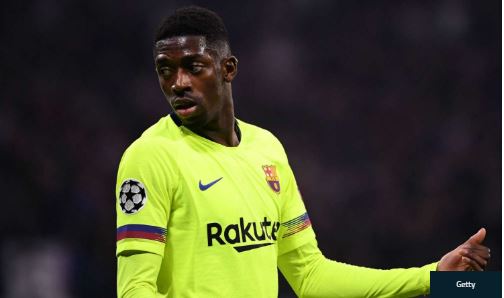 Ousmane Dembele
Liverpool have been informed that they can take Ousmane Dembele from Barcelona for £90 million, claims TEAMtalk.
The France international is being linked with a move away from Camp Nou after two seasons in Catalunya and has attracted interest from Anfield in the past.
Chelsea reject Barca and Atletico bids for Willian. The La Liga clubs made £35m offers for the winger
Chelsea have rejected a pair of £35 million ($44m) bids from Barcelona and Atletico Madrid for Willian, according to Sky Sports.
Willian was subject to multiple bids from Barcelona last summer and has one year left on his contract with the Blues.
However, Chelsea do not want to lose the winger, having sold Eden Hazard and facing a transfer ban, and are hopeful they can extend Willian on a two-year deal.
Barcelona have held no talks with Antoine Griezmann regarding a move to Camp Nou, claims club president Josep Maria Bartomeu, with there “nothing to announce” when it comes to the Atletico Madrid striker.
The Blaugrana supremo has told RAC1: "We've always said the same. We haven't spoken to him. There's nothing to it."
Atletico Madrid are set to win the race for Benfica starlet Joao Felix, claims Marca.
A move to Spain is said to be imminent for a 19-year-old forward who has been heavily linked with Manchester rivals United and City.
Philippe Coutinho will not consider a move to Manchester United out of respect to Liverpool, reports Sky Sports.
The Barcelona playmaker has been linked with a return to the Premier League, but he will not be heading to Old Trafford.
Top Stories