Nigeria's female national team suffered a 3-0 defeat in the hands of Germany at the ongoing FIFA Women's World Cup. 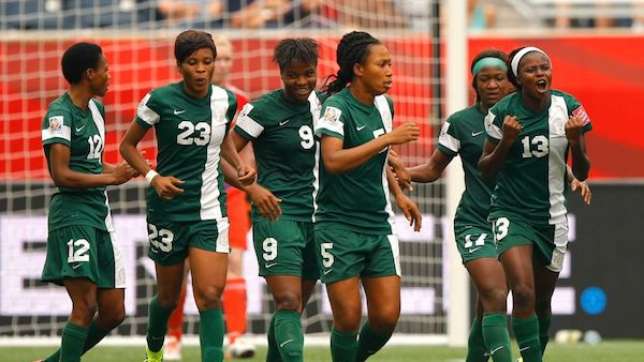 Nigeria's Super Falcons
Germany qualified for an eighth consecutive quarter-final appearance at the FIFA Women’s World Cup by beating the Super Falcons 3-0 at Stade des Alpes in Grenoble on Saturday.
The Germans were favourites to win the Round of 16 clash, and it was further evident with 60 percent possession and 12 shots in total during the game.
The two-times champions duly lived up to their game plan with a 20th minute goal from Alexandra Popp as the striker made her 100th appearance for the German side.
The African champions struggled to keep themselves alive in the game which had 17,988 spectators in attendance.
But a foul by Evelyn Nwabuoku soon resulted in a penalty kick, thanks to the VAR which spotted the foul.
Sara Daebritz scored from the penalty kick spot to record her third goal of the tournament in the 27th minute, with the goal further helping Germany to keep Nigeria at bay.
The Falcons had a chance to appear on the scoresheet five minutes into the second half through a substitute Rasheedat Ajibade cross.
But striker Desire Oparanozie did not in time to place the ball at the back of the empty net.
The Europeans eliminated the chance of a possible comeback for the African side as Lea Schuller benefitted from an error from Halimat Ayinde in the 82nd minute to seal victory.
It was however not altogether a bad day for the Falcons as defender Onome Ebi gained a new African record.
She became the first African player to record 14 appearances at the FIFA Women’s World Cup.
Germany will face either Sweden or Canada in the quarter-finals on June 29.
-NAN
Top Stories