Investigators say missing University of Utah student has been murdered - and police have arrested a Salt Lake City man they say killed her and burned her body. 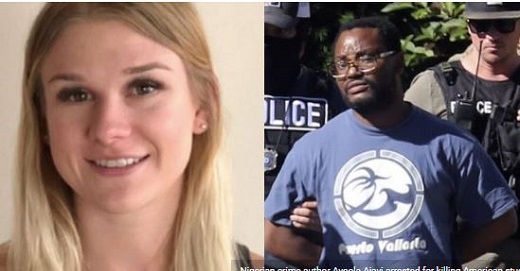 Police had been searching for the 23-year-old student for 11 days prior to the announcement. The news comes one day after police investigated a Salt Lake City home, where they removed boxes of ammunition among other items on Thursday.

The items tested included female human tissue and personal items that belonged to Lueck. Brown said the items were charred and neighbors had reportedly observed the suspect "burning something in his backyard with the use of gas on June 17 and June 18." Police found an area in Ajayi's backyard that appeared to have been recently dug up.

Lueck landed at the Salt Lake City airport on June 17. She took a ride-share from there to a park about 11 miles away around 3 a.m. Police said she then got into another car and hadn't been heard from since.

Through social media and phone records, authorities determined that Lueck communicated with Ajayi the day before her disappearance. Police said they were both at the park at the same time.

Police said Ajayi denied having ever met Lueck and said he didn't know what she looked like. Brown said Ajayi's account was not consistent with the evidence police obtained.

Police said they've received more than 200 tips related to the case and the search warrant at the home was one of several they've served. They also towed a car from the property, saying there were items inside they wanted to examine.

"The death of Mackenzie Lueck is devastating news," University of Utah President Ruth V. Watkins said in a statement. "On behalf of the university, I express our heartfelt sympathy to the family, friends and classmates of Mackenzie during this very difficult time."
Top Stories