Man Poses With Monster Fish He Caught In A Lake (Photo)


A 42-year-old man has shared a photo of a monster fish he caught at a stream in Thailand. 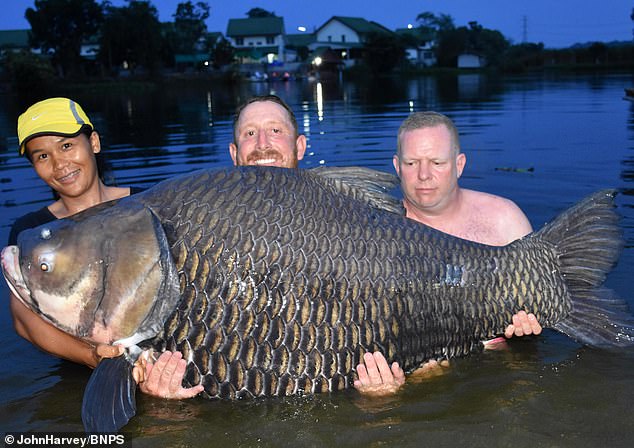 Harvey middle caught the monster fish
A British man has posed with a fish said to be the world's biggest carp fish that weighed a staggering 232lbs he caught at a stream.
According to Dailymail, John Harvey, 42, landed the enormous Siamese carp after a knee-trembling 80 minute battle to reel it in at a lake in Thailand.
British-born John from Westleigh, near Bideford, Devon, couldn't believe his eyes when the monster broke the surface of the water.
It tipped the scales at 16 and a half stone (105kg).
The colossal carp had to be weighed using scales on a robust stainless steel tripod.
And John needed help from two other anglers, Dan Hastings and Lagoon guide, Nanwam, to lift the huge specimen to pose for a picture with it at the Palm Tree Lagoon at Chedi Hak in southern Thailand.
His catch beat the previous world record set for a Siamese carp by 10lbs.
John, a property investor, celebrated by buying all the anglers on the lake a beer.
The Briton, who has been fishing since he was three-years-old, said: 'As soon as it took the bait I knew it was going to be a big fish.
'It wasn't fighting against me too hard, it was the weight of the carp that was the real challenge'.
Top Stories