The pacey forward, Mbappe himself claimed earlier this summer that a 'new project' may appeal to him. 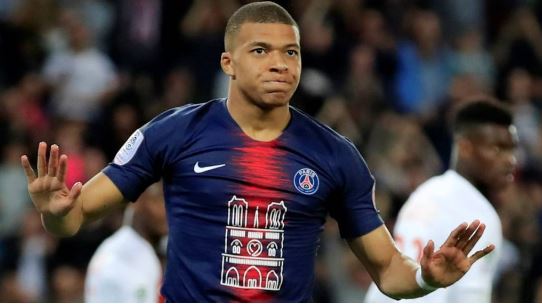 Kylian Mbappe
Paris Saint-Germain sporting director, Leonardo has said he cannot promise fans that Kylian Mbappe will remain at the club.
Real Madrid are believed to be seriously courting the 20-year-old, after dropping interest in his team-mate, Neymar.
Mbappe himself claimed earlier this summer that a ‘new project’ may appeal to him.
Leonardo believes the Frenchman is happy in Paris but refused to give guarantees that he will still be at the Parc des Princes when the transfer window closes.
“There’s no doubt he’s a priority for us or not. Mbappe is here and he is very important to the club, there’s no question about it.
“When training resumed on Monday, he arrived with a great attitude – a big smile on his face.
“As always. He’s very charismatic, the fans love him. It’s important to have a player like him in the team – one who’s young and always happy and smiling,” he told Le Parisien.
Leonardo added: “I never make promises for two reasons. Firstly because I am not the person who is responsible for everything that happens at this club and, secondly, I don’t want to throw promises up into the air without being sure that they can be kept.
“I’m only interested in reality, and what we know for sure today.”
Despite his young age, Mbappe has already scored 60 goals for PSG in two seasons.
Top Stories