The Super Eagles of Nigeria has made significant improvement in FIFA's latest ranking after moving 12 spots. 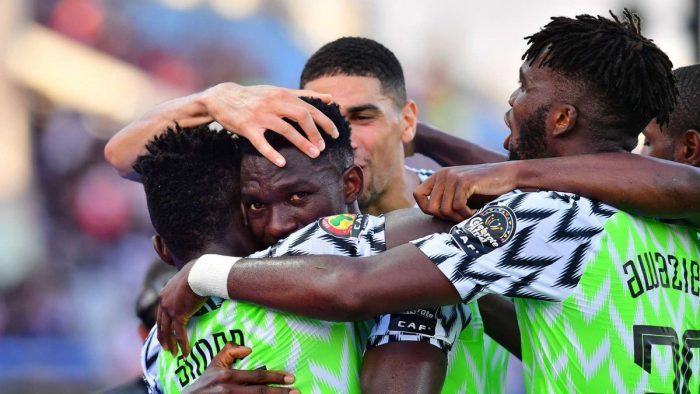 Super Eagles
Nigeria’s Super Eagles have moved up 12 spots in the July FIFA ranking, to place 33rd in the world after winning bronze at the just-concluded Africa Cup of Nations tournament.
In the ranking table released by the world football governing body on Thursday, Nigeria garnered 1, 481 points as against 1, 433 it had in June to place 45th.
The movement has now placed Nigeria as the third in Africa behind Senegal and Tunisia, who are 20th and 29th in the world, respectively.
African champions Algeria (40th, up 28) are the biggest mover in the July edition by ranks and points (up 117), while fellow finalists, Senegal (20th, up 2) did not make a huge leap but reached their best-ever ranking position.
AFCON surprise quarter-finalists, Madagascar (96th, up 12) and Benin (82nd, up 6) saw their continental performances rewarded with a ranking rise.
On the global scene, new South American champions, Brazil (2nd, up 1) leapfrogged France (3rd, down 1) in second place and trail leaders Belgium by a narrow margin of 20 points.
Other sides in Copa America action improved their ranking positions substantially.
Quarter-finalists Uruguay (5th, up 3), Colombia (8th, up 5) and Venezuela (26th, up 7) – who reached their best-ever ranking position after their run to the last eight.
Bronze-medalists, Argentina (10th, up 1) complete a quartet of South American teams in the top 10.
Concacaf champions Mexico (12th, up 6) and fellow finalists U.S. (22nd, up 8) made big strides up the table with an honourable mention for surprise semi-finalist, Haiti (83rd, up 18).
Top Stories