The Gunners are believed to have rejected the offer for the winger, who made 51 appearances in all competitions last season. 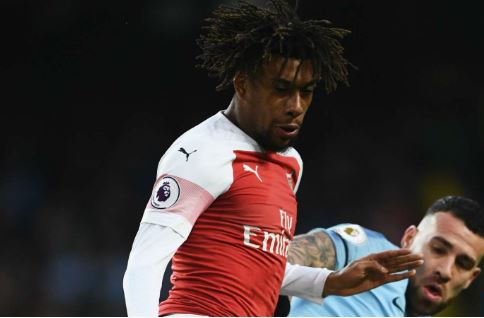 Alex Iwobi
Everton have launched a bid to sign Alex Iwobi before Thursday’s transfer deadline.
The Toffees have been chasing Wilfried Zaha in recent weeks but have seen at least two bids knocked back by Crystal Palace for the Ivory Coast international.
And with boss Marco Silva keen to add another winger to his squad, he has turned his attentions to Iwobi, with Everton having now made their first move to land the 23-year-old.
The Goodison Park outfit have tabled an opening offer - believed to total around £30 million, including add-ons - for the Gunners' academy graduate. Arsenal have rejected the bid, however.
Everton must now decide whether to increase their offer for a player who made 51 appearances last season in all competitions for Unai Emery’s side, scoring six goals.
Iwobi was a key player for Emery during his first campaign in charge at the Emirates, with no player in the squad featuring in more games than the young forward.
But he is not a guaranteed starter and the arrival of Nicolas Pepe from Lille and the return of Reiss Nelson following his loan spell with Hoffenheim, could see his opportunities limited further.
Speaking during the Africa Cup of Nations earlier this summer, where he helped Nigeria to a third-placed finish, Iwobi admitted that he would have to consider leaving his boyhood club if he believed he might struggle to get regular playing time.
“I am not one to chicken out,” he said. “I have had it all over the years, being told I’m not good enough.
“So whenever the chance comes I always try and prove I should be starting. Obviously my joy is to play football and not just sit out.
“If it comes to that I would have no choice but to leave. But I would always put up a fight to play – that is what I’ve done all my life.”
The interest from Everton gives Arsenal a headache so close to Thursday’s transfer deadline.
Iwobi is home-grown and provides versatility across the frontline in a squad that will once again compete in four competitions next season.
But a significant offer could tempt them into doing business, as they continue to try and bolster their defence before Thursday’s 5pm deadline.
Arsenal are in talks with RB Leipzig over Dayot Upamecano, but the German side are demanding up to £75 million ($90m) for the 20-year-old centre-back.
There has also been contact with Juventus over Daniele Rugani, with a two-year loan offer having been rejected by the Serie A champions last week.
The 24-year-old continues to be linked with a move to the Emirates, however, although sources at the north London club insist that he will not be joining.
Arsenal are still hoping to beat the deadline to sign Kieran Tierney from Celtic for £25m ($30m), with a third bid for the left-back expected imminently.
Top Stories