Notable football stars made the headlines as they were involved in shock moves away from their previous clubs. 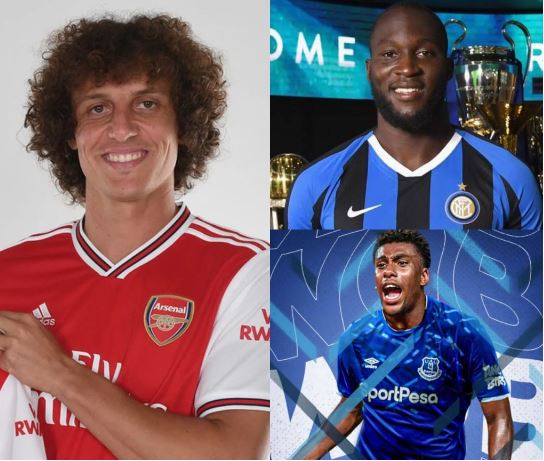 Luiz, Lukaku and Iwobi
The transfer window was busier last night for Premier League clubs being the final day of the window.
Together Premier League clubs spent £1.41bn this summer, which is just short of the record £1.43bn spent two seasons ago, according to Four Four Two.
Notable football stars made the headlines as they were involved in shock moves away from their previous clubs.
Players such as Romelu Lukaku, David Luiz, and Andy Carroll were among the headline movers on a busy final day.
Arsenal completed their shock signing of Luiz from Chelsea while Manchester United allowed Lukaku switch to Italian giants, Inter Milan.
The other player that joined Arsenal yesterday was Kieran Tierney from Celtic.
Arsenal’s deadline day moves saw them edge past Manchester City to become the Premier League’s biggest spenders of the summer having pushed out £155million.
Luiz’s surprise move came at a reported cost of £7million with Tierney arriving for around £25million.
For Newcastle United they were able to bring back Carroll who left the club eight years ago.
Tottenham also captured Ryan Sessegnon from Fulham.
The Spurs spent a reported £25million to land highly-rated winger Sessegnon on a six-year deal from Fulham with Josh Onomah moving the other way.
Midfielder Giovani Lo Celso also joined Spurs on a season-long loan from Real Betis.
Nigerian midfielder, Alex Iwobi left Arsenal switching to Everton.
Everton signed Iwobi for an undisclosed fee on a five-year contract.
For Manchester City they were able to sign 33-year-old former England goalkeeper Scott Carson, on a season-long loan.
Top Stories