Mascarell joined the Spanish giants in 2010 and made his only first-team appearance in the Copa del Rey in 2013. 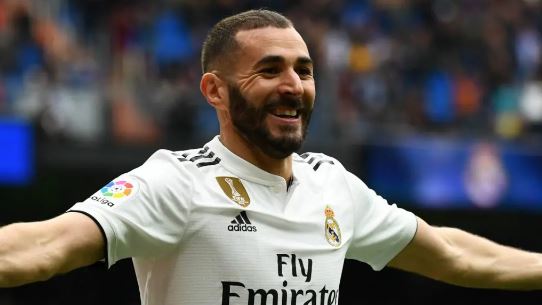 Karim Benzema
Real Madrid striker, Karim Benzema has been hailed as “the world’s best centre-forward” in the last 10 years by former team mate, Omar Mascarell.
Mascarell joined the Spanish giants in 2010 and made his only first-team appearance in the Copa del Rey in 2013.
The midfielder was then sent on loan to Sporting Gijon and Eintracht Frankfurt before Schalke signed him on a permanent deal in 2018.
“Real Madrid is the biggest club in the world.
“After all that I’ve seen at this club, nothing impresses me as quickly.
“In my first training session with the first team, I played with Mesut Ozil, Cristiano Ronaldo, Xabi Alonso and Sergio Ramos in a team. That was absolutely mad.
“As a young player from the club’s own youth system, you have almost no chance against such superstars.
“Karim Benzema maybe impressed me the most. For me, he is the world’s best centre-forward in the past 10 years, but also an incredibly nice and down to earth guy who always helps young players and gives them advice.
“That’s why everyone at Real Madrid loves him,” Mascarell told Goal.
Top Stories

Oh No! Footballer Dies After Being Brutally Assaulted Just Hours Before Match