Anthony Joshua Speaks Out On Suffering Concussion While Fighting Ruiz


Anthony Joshua has spoken out on suffering concussion during his fight with Andy Ruiz Jr. 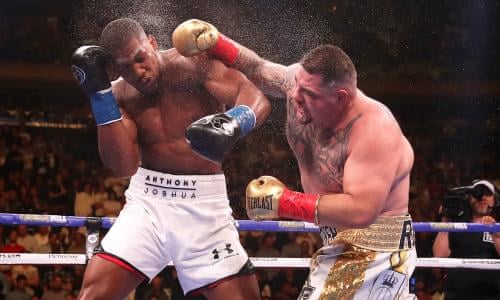 Anthony Joshua has branded concussion a “weak term” after his trainer Rob McCracken sparked controversy by admitting he knew his fighter was concussed during his fight with Andy Ruiz Jr., the Guardian reports.
McCracken’s comments sparked a discussion about the safety of fighters, but Joshua dismissed the idea he was finished the minute he suffered the concussion. Joshua, speaking to the Guardian before McCracken’s comments were made, explained he was ready to fight through the concussion to beat Ruiz Jr last June. “I knew where I was,” Joshua said about the third round.

After causing a storm with his original comments, McCracken moved to clarify his position on concussion. “I am not a doctor and it may be that concussed is not the right term to have used,”

McCracken said. ‘The health of all the boxers I work with is of paramount importance to me and I have always used my judgment and experience to do what is right for them.

“There is no formal concussion protocol where the doctor steps in to assess the boxer, so you have to use your experience as a coach and your knowledge of the person to make a decision on whether you think they can recover. ‘I have had this a number of times in my career in professional boxing where boxers have recovered from a difficult round to go on and win the fight. ‘I have also pulled boxers out of fights because I knew it was not in their interests to continue.”
Top Stories