He qualifies for Nigeria through his father, who is close childhood friends with the president of the Nigerian Football Federation, Amaju Pinnick. 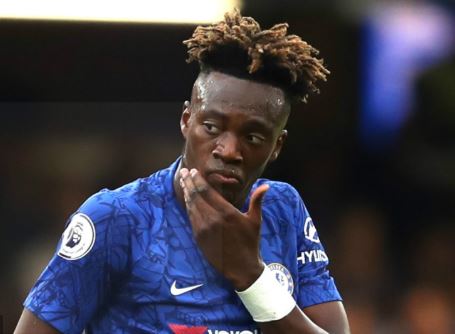 Tammy Abraham
Tammy Abraham is ready to accept an England call-up if Gareth Southgate picks the striker in his squad for the Euro 2020 qualifiers against Czech Republic and Bulgaria - a move that could seal Abraham’s international future , dashing Nigeria’s hopes of poaching him.
Southgate names his squad for England’s double-header on Thursday with Abraham waiting to see whether or not his good form for Chelsea will be enough to earn him a place in the squad.
Nigeria have been attempting to convince Abraham to switch his international allegiance, despite the fact the 21-year-old has already won two senior England caps in friendlies against Germany and Brazil. Abraham has not publicly committed himself to either county, but it is understood he wants to play for England and would accept a call from Southgate if it came.
He qualifies for Nigeria through his father, who is close childhood friends with the president of the Nigerian Football Federation, Amaju Pinnick.
Were Abraham to make any sort of appearance for England against Czech Republic or Bulgaria, then he would be committed to the Three Lions for the rest of his life because the two games are European Championship qualifiers.
Abraham has netted seven goals in the Premier League this season , only one less than Sergio Aguero, which makes him the highest scoring Englishman in the top flight.
Southgate revealed that Abraham was very much on his radar during the last international break in which he selected Kane, Marcus Rashford and Callum Wilson as his out-and-out strikers.
There is a fitness check to be madeover Rashford and Southgate also has the option of making space for a fourth striker by dropping out-of-form Jesse Lingard .
Southgate’s England staff have requested the medical records of Abraham from Chelsea ahead of his latest squad announcement. Other than Abraham, Nigeria are also interested in trying to poach his Chelsea team-mate Fikayo Tomori, who has represented England and Canada at youth level.
Southgate will again be without John Stones, but it remains to be seen whether he sticks with the quartet of Harry Maguire, Michael Keane, Joe Gomez and Tyrone Mings.
Tomori has already been rewarded for his impressive Chelsea performances with the offer of a new contract, which he is expected to sign.
Lampard revealed ahead of the victory over Brighton that 21-year-old Tomori is currently one of his first two picks at centre-back.
Ruben Loftus-Cheek, Mason Mount, Callum Hudson-Odoi and Billy Gilmour have already signed new deals with Abraham and Tomori next in line.
Top Stories