Shocker! Champion Boxer Collapses And Dies After Taking A Punch To His Body During Training


A champion boxer has died after he took a punch to the stomach during training, it has been reported. 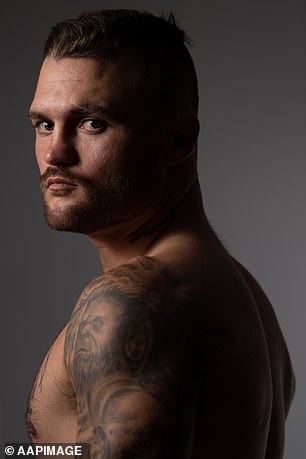 Champion Australian boxer Dwight Ritchie has died in a freak accident after he was punched in the stomach during training.

The 27-year-old was sparring with Michael Zerafa on Saturday night in Melbourne when he took a body shot before walking to his corner of the ring and collapsing.

Ritchie, from Shepparton in Victoria, only lost twice in his 21-fight career, most recently against Tim Tszyu when they fought for the IBF Australasian super-welterweight title in August.

Ritchie had been the holder of that belt going into the bout, and also previously held the Australian middleweight title.

His promoter and friend Jake Ellis announced the tragic news in a heartfelt tribute on Facebook.

'It is with great sadness and shock to announce that 'The Fighting Cowboy' Dwight Ritchie sadly passed away today doing what he loved,' the post read.

'Dwight will always be remembered by the boxing fraternity as one of the brightest talents in Australia whose fighting style embodied exactly how he lived.

Ritchie was helping Zerafa train for his upcoming rematch with Jeff Horn when the incident occurred, the Sydney Morning Herald reports.

He was also preparing for light middleweight fight against Tommy Browne, 36, in December.

'Just gutted to hear of the passing of boxer Dwight Ritchie in a sparring accident today,' Renee Gartner tweeted.

'Thoughts with all of his family and friends and the boxing community,' she wrote.

Team Ellis Boxing, where Ritchie started out, have set up a gofundme to raise money to support his three daughters - which drew almost $5000 in its first four hours.

A proud Aboriginal man, he credits boxing with keeping him away from a life of crime.

'If I wasn’t a boxer I’d be in jail, 100 percent. The things I was getting up to as a kid,' he wrote for the Players Voice in August.

'We just had no direction and we were following that same cycle that was around us then, the same traps everyone else was getting caught in.
'I was lucky I found boxing, because without it there’s no doubt in my mind that I’d be locked up right now instead of in the gym preparing for a fight against Tim Tszyu, still working on my dream of a world title shot'.

He also beat childhood cancer, first at six months then again a year later, to become a professional athlete in his adult years.