Horror! Tourist Falls To His Death While Taking Selfie At A Waterfall (Photo)


A tourist has died a terrible death after falling from a waterfall while taking selfie. 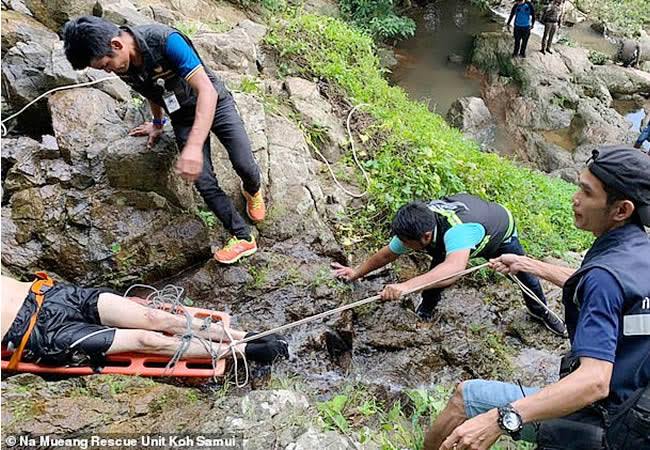 Rescuers at the scene of the tragedy. Photo: Na Mueang Rescue Unit Koh Samui
A French tourist died on Friday while trying to take a selfie at a Thai waterfall.
The accident happened on Thursday afternoon on the resort island of Ko Samui in southern Thailand.
Tourist Police said the 33-year-old man fell from Na Mueng 2 waterfall.
A Spanish tourist died in the same spot several months ago, Samui tourist police officer Poowadol Wiriyanarangkul told dpa.
“There are already signs saying ‘No entry’ as the area is quite dangerous.
“Some tourists may want to get better photos, but its quite steep and slippery there and he slipped.’’
“A friend that accompanied him saw the man take pictures and fall’’ about a height equivalent to a three-storey house, he said.
Police have already contacted the deceased relatives.
Although a preliminary coroner’s report has yet to be issued, police believe the tourist died from fractured skull.
(dpa/NAN)
Top Stories