Shock As Priceless Diamond Gets Stolen From Museum


A priceless diamond has been reportedly stolen from a German museum, sparking some shock in the area. 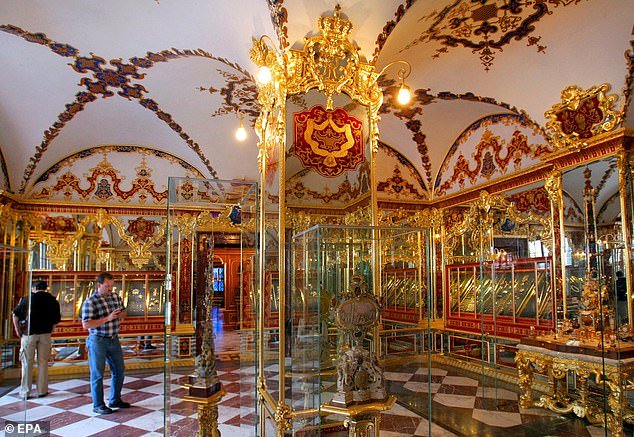 Diamond thieves stole three ‘priceless’ sets of 18th-century jewellery from a German museum in an early-morning raid, the News Agency of Nigeria reports.

The Green Vault in Dresden has suffered an ‘immeasurable’ loss after burglars broke into the building in the early hours of Monday, officials said.

The thieves switched off a power supply at 5a.m. before breaking through a window into a museum which once boasted it was ‘as secure as Fort Knox’.

Once inside, they stole three sets of diamonds which were commissioned by Saxony’s ruler Augustus the Strong in an 18th-century show of power.

Museum experts have said the items are priceless and could never be sold, but report said that up to a billion Euros’ worth of treasures may have been stolen.

Two thieves were apparently caught on CCTV cameras inside the museum but they escaped in a getaway car and a manhunt has so far proved fruitless.

At a press conference this afternoon, museum director Marion Ackermann said staff were ‘shocked’ by the ‘brutality’ of the break-in.

Thieves smashed into a glass cabinet and made off with three sets of jewellery which were made for Augustus the Strong, the elector of Saxony in the 18th century, she explained.

Augustus competed with French monarch Louis XIV to assemble the most extravagant jewellery, she explained, describing the items stolen as ‘state treasures of the 18th century’.

The material worth of the jewellery was less important than the fact they had come as a set, Ackermann said.

Asked about the suggested value of a billion Euros (£850million), she said the value of the items stolen could not be quantified.

‘We’re dealing with priceless artistic and cultural treasures,’ she told reporters in Dresden.

Police say they were alerted to the break-in at 4.59am and suspect that the thieves were behind an electrical fire which broke out nearby.

Shutting off the electricity may have helped the burglars to disable the museum’s alarm systems and also left the area in darkness, it is feared.

In addition, a burned-out vehicle was discovered nearby and detectives are now trying to track down the owner to establish if the fire was related to the theft.

Reports in Germany say the thieves were ‘noticeably small’ and able to fit through a tiny space in a window.

State police officers are now at the crime scene as they investigate how the thieves got inside and stole the jewellery.

‘We have not identified a perpetrator and nor have we yet made any arrests,’ police spokesman Marko Laske said.

At the press conference, police said that the cabinet in question had been made of special safety glass but that it was unclear how the thieves had got inside, perhaps by sawing through.

Detectives are now examining the video footage on which two people are seen, but others may have been waiting outside.

However, a getaway car could be well on its way to the motorway within minutes of leaving the museum, they warned.

A notice on the museum’s website this morning states only that the building is closed today for ‘organisational reasons’.

State interior minister Roland Woeller said it was a ‘bitter day for the cultural heritage of Saxony’.

The thieves ‘stole cultural treasures of immeasurable worth – that is not only the material worth but also the intangible worth to the state of Saxony, which is impossible to estimate,’ he said.

A 1billion Euro art theft would be comfortably the largest in history, surpassing the 500million dollars raid on the Gardner Museum in Boston nearly 30 years ago.

Two thieves disguised as police officers stole 13 works of art from the Boston museum in March 1990 and the crime remains unsolved.

The Dresden museum was founded in 1723 and houses thousands of items including historic coins and jewellery.

However, one of its most valuable treasures – a 41-carat naturally green diamond called the Dresden Green – is currently out on loan in New York.