Members of the Indigenous People of Biafra (IPOB) have been given yet another warning by the police over the burial of Nnamdi Kanu's parents. 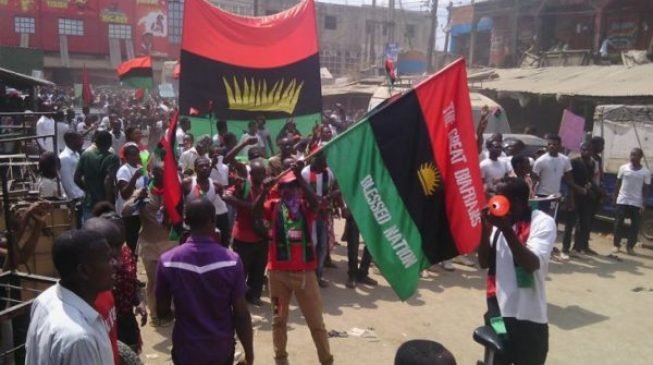 IPOB members
The Nigeria Police has again warned members of the Indigenous People of Biafra (IPOB) not to come near the venue of the burial of the Nnamdi Kanu's parents.
The Commissioner of Police, Ene Okon, had earlier issued a similar warning.
Kanu’s mother, Sally, and father, Eze Israel Kanu, died in August and December 2019, respectively.
The duo will be buried on Friday in Umuahia North Local Government Area of Abia State.
On Tuesday, the Police stated that it was only against an IPOB gathering and would not disrupt the burial. It also warned attendees not to come with anything that would identify them as members of the proscribed group.
The command Public Relations Officer, SP Geoffrey Ogbonna, in a statement said “he (Okon) has the good intention to provide security for lives and property of the people during the burial.
“The presence of security operatives in and around the community should not be seen as a threat but a proactive measure to prevent the infiltration of miscreants and hoodlums into the community to foment trouble and truncate the burial.”
Ogbonna noted that the command heard “that miscreants disguising as IPOB members intend to hijack the burial, in solidarity with its leader.”
The spokesman warned IPOB “to steer clear from the environment”, saying that the command “will not fold its arms and watch their unlawful activities.”
Top Stories