African and Nigerian star, Mikel Obi has shared a beautiful family photo to celebrate his birthday. 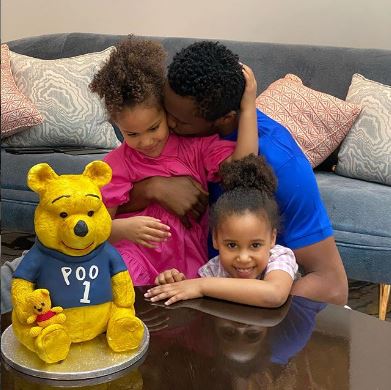 Mikel Obi and his girls as he celebrates birthday
Nigerian footballer, John Obi Mikel is 33 today. He was born 22 April 1987.
The footballer has taken to his Instagram page to share a beautiful photo with his girls as he thanked all who wished him a happy birthday.
He wrote: "Thank you for all the kind messages and wishes! And thank you my love @olga_allegra for organising the most special surprise ♥️"
Obi is a Nigerian professional footballer who plays as a defensive midfielder.
Mikel began his career with local club Plateau United, before joining Norwegian club Lyn at the age of 17 in 2004. In 2006, he made a controversial transfer to English club Chelsea after Manchester United claimed they had already signed him. He stayed with Chelsea for 11 years, before moving to China with Tianjin TEDA in 2017.
After two years in China, he returned to England on a short-term deal with Middlesbrough, before joining Trabzonspor on a free transfer in July 2019.
In a 14-year international career between 2005 and 2019, he played 88 times for Nigeria, scoring six goals.
Top Stories