A super eagles defender has been left in a state of happiness after welcoming his first child. 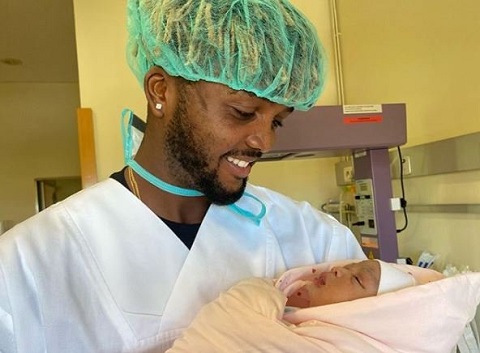 Chidozie Awaziem welcomes first child
Nigerian international and Super Eagles player, Chidozie Awaziem has welcomed his first child with his girlfriend.
The 23-year-old talented footballer, who plies his trade with CD Leganés, a Spanish club, on loan from FC Porto in Portugal, took to his Instagram page to break the good news.
The Enugu-born football star accompanied the post with a picture of himself carrying the little baby he named Christel.
He also appreciated God for the bundle of joy.
“I can’t explain the way I feel right now…thank you God for giving me Christel, Latest dad in town,” he wrote.
Awaziem, however, did not disclose any information about the child’s gender or mother.
On January 21, the central defender had celebrated a lady, who he described as the “woman in my life,” on his Instagram page on the occasion of her birthday.
“After all these years you are still my queen and counting HAPPY BIRTHDAY to the woman of my life,” he had written alongside pictures of the pair.
It remain to be seen if she is the mother of the newborn baby.
The centre back made his first appearance for the Super Eagles on June 1, 2017 in a 3–0 win over Togo in a friendly match played in Paris.
He was included in Gernot Rohr’s 23-man squad for the 2018 FIFA World Cup in Russia – but as an unused player during the tournament. He was also picked for the 2019 Africa Cup of Nations.

I can't explain the way I feel right now...thank you God for giving me Christel, Latest dad in town 😍🥰🥰😍🥰❤️❤️❤️❤️❤️