A footage has shown the tragic moment a businessman was brutally assassinated inside a market. 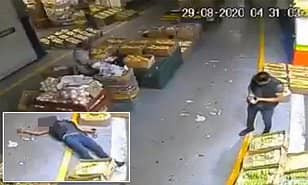 The businessman was assassinated by gunmen at a wholesale market
A gunman has been spotted executing a business owner inside Mexico City's largest wholesale market over the weekend.
The shocking incident took place shortly after 4:30am on Saturday, August 29, after Geramael López arrived to open his plantain stand at Central de Abasto.
Surveillance footage shows the 34-year-old businessman counting money while another vendor is seen nearby at his vegetable stand before an individual approaches López from behind
A few seconds later, the shooter fired two shots at López's head, sending other nearby vendors running for safety before he escaped.
López was pronounced dead by paramedics at the scene after the shooting.
According to El Universal, López had only moved from the southern state of Chiapas to the Mexican capital and was on his second day of work.
The shooting was linked to area gangs seeking extortion payments from vendors for the right to operate their businesses at Central de Abasto.
No arrests have been reported in connection with the brutal assassination of Geramael López.
Watch video below: