The MRS tanker with unknown registration loaded with 60,000 litres of Premium Motor Spirit PMS, was said to have suffered mechanical fault on motion. 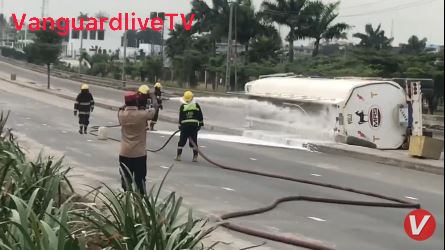 According to a Vanguard report, perrenial gridlock took over the main carriage section of Anthony area of Lagos on Friday following a lone accident involving a petroleum tanker which fell sideways.

The incident occurred at about 2.40 pm, inward Gbagada.

The MRS tanker with unknown registration loaded with 60,000 litres of Premium Motor Spirit PMS, was said to have suffered mechanical fault on motion with the resultant effects leading to a lone accident as it fell sideways spilling its content.

The aftermath of the accident obstructed vehicular movement on the main carriageway.

However, no loss of life nor injuries sustained at the scene of the incident.

As at the time of this report, Lagos State Emergency Management Agency LASEMA, Response Team, fire services, Lagos State Traffic Management Authority LASTMA, Federal Road Safety Corps FRSC, and Officers of the Nigeria Police Force were responders at the scene working together to evacuate the accident tanker off the road to restore normalcy along the axis and prevent any secondary incident as the entire area have been cordoned off by the LRT while traffic had been diverted.

Also, the entire scene of the incident has been blanketed by LRU Fire Unit and the state Fire Service while awaiting the arrival of an empty tanker for transloading.