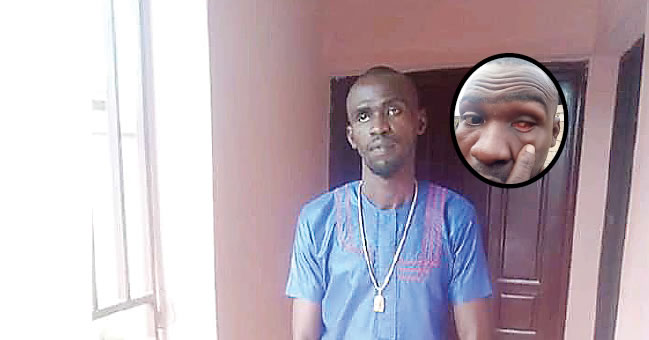 Anthony Onuagbara, a graduate of Marketing from the Anambra State University (now Chukwuemeka Odumegwu Ojukwu University), Uli,  tells talks about his experiences in the hands of SARS men.

You were a corps member in 2012. Where were you posted for your primary assignment?

I was posted to the Bursar’s Office at the Ekiti State University, Ado-Ekiti for my primary assignment. I read Marketing at the Anambra State University (now Chukwuemeka Odumegwu Ojukwu University).

Can you recall how you were brutalised by policemen attached to the disbanded Special Anti-Robbery Squad?

It happened in August 2012. I was at home around the Adebayo area of Ado-Ekiti. It happened around 8pm. A corps member living in the same compound with me came back home with a sex worker. About five minutes later, the girl stormed out of the house angrily and verbally abused the corps member. I asked him what happened and he told me that he picked up the sex worker at Fajuyi area and brought her home without agreeing on the price. But he said when they got home, the woman insisted on collecting N2,000 or thereabouts but he could not afford it as a corps member. He said the woman became angry and stormed out of the house. He went back to his room and I went to bed. I was in bed when some armed policemen came and forced our doors open.

Why did they do that?

The lady went and told them that she was sexually abused. We later found out that they were the sex worker’s regular customers so she lied against the corps member staying in the same compound with me. Those who came were with the Special Anti-Robbery Squad and they started beating everybody. They didn’t even ask for the person that had dealings with the sex worker. They beat me and other people there. One of them hit my right eye with the butt of his rifle. I started feeling pain but the beating did not stop.

What offence were you accused of committing?

They said somebody among us sexually abused the lady and without asking who even did that, they descended on us and beat us mercilessly. I thought I would die that night but God saved me.

We were taken to the police station and we were there for four nights.

Were you taken to hospital for treatment?

Which treatment? You don’t know these people at all. But no matter how terrible a team may be, there will still be one nice person among them. One of them bought drugs for me and that was the only medication I was given.

We were later taken to the commissioner of police at the time and I told him I was a corps member and was brutalised by his men.

The commissioner of police was confused; I think he was nice but he wanted to be sure that I was innocent. He asked me to swear with the Bible and I did. I told him one of the SARS men bought a drug for me and I showed him the drugs. It was at that point that he believed I was not lying. I showed him the SARS man that bought the drugs for me.

Before that, the OC SARS (officer in charge) brought out some weapons and put them before me. He then took my photograph together with the weapons. He brought out some guns and knives and other things and said they found those weapons on us.

So, we were eventually arraigned in a court – I think a Magistrates’ Court around Fajuyi. We were charged for armed robbery; that was when I knew some policemen are worse than the devil himself. You beat me up, damaged my eye and still called me an armed robber. It was terrible.

How did the armed robbery case go?

A fellow corps member who is a lawyer assisted us a lot. She got a lawyer, who is a Senior Advocate of Nigeria to defend us. The case was argued and we were later acquitted when the judge saw the inconsistencies in their claims.

What happened after you were acquitted?

I wrote a petition against the police. The Inspector General of Police at the time sent some policemen to my house at Adebayo, where I lived then. The matter attracted public attention and sympathy because I was a corps member. The policemen brought the OC SARS to my house. I saw that they had tortured the SARS men that came to our house and asked if I could identify them. They came in three vans. They brought out the OC SARS and he had wounds all over his body; they must have tortured him. Those who brought them asked if they were the policemen that beat me and I said yes.

How did it go after that?

I became afraid. I saw how the OC SARS was beaten and knew if he was released, he could arrange for me to be killed so I left my house and lost interest in everything. I didn’t want to be killed. I didn’t get anything else from the police.

Did the National Youth Service Corps get involved in the case?

That was what got me angry. The NYSC did not do anything. Some corps members said they would disrupt the passing-out parade because of my case. They said the NYSC ought to have supported me but they left me to my fate.

What happened to the right eye where the policeman hit you?

The eye became blind completely. I can’t see anything with it. When I close my left eye, I can’t see anything. I was looking horrible with it and each time I saw myself in the mirror, I always cried. I cried for many reasons: One, I lost one eye all of a sudden, not because I committed any offence, but because some people just oppressed me.  Also, the eye reminds me of what I passed through then. But I thank God, I am alive.

One of my friends came from overseas and was told I had become withdrawn because of the bad eye. He took me to hospital and I was given an artificial eye. I can remove the artificial eye and put it back. It’s better now because if you don’t come close to me, you won’t observe that I can’t see with it. After the incident, I was treated at the Ekiti State University Teaching Hospital.

What are you doing now?

I worked with the Anambra State Government for some time but I am in Abidjan, Côte D’ Ivoire now to learn a skill from one of my brothers.

Were you around during the #EndSARS protest?

I was not around. I was in Abidjan during the protests.

Would you have joined the protest if you were in Nigeria?

I would not have joined the protest but I would have joined in sharing the story of how SARS took one eye from me and still arraigned me in court as an armed robber. It was God that saved me; if the court had believed them, that might have been my end. It is only a fool that will not support that SARS must be disbanded. A woman reported an incident to them because she was their girlfriend and they came, brutalised us and took my right eye from me. I know God will surely fight for me even if I don’t get justice from human beings and government institutions.