cars impounded for driving against traffic in Lagos state have been auctioned by the government. 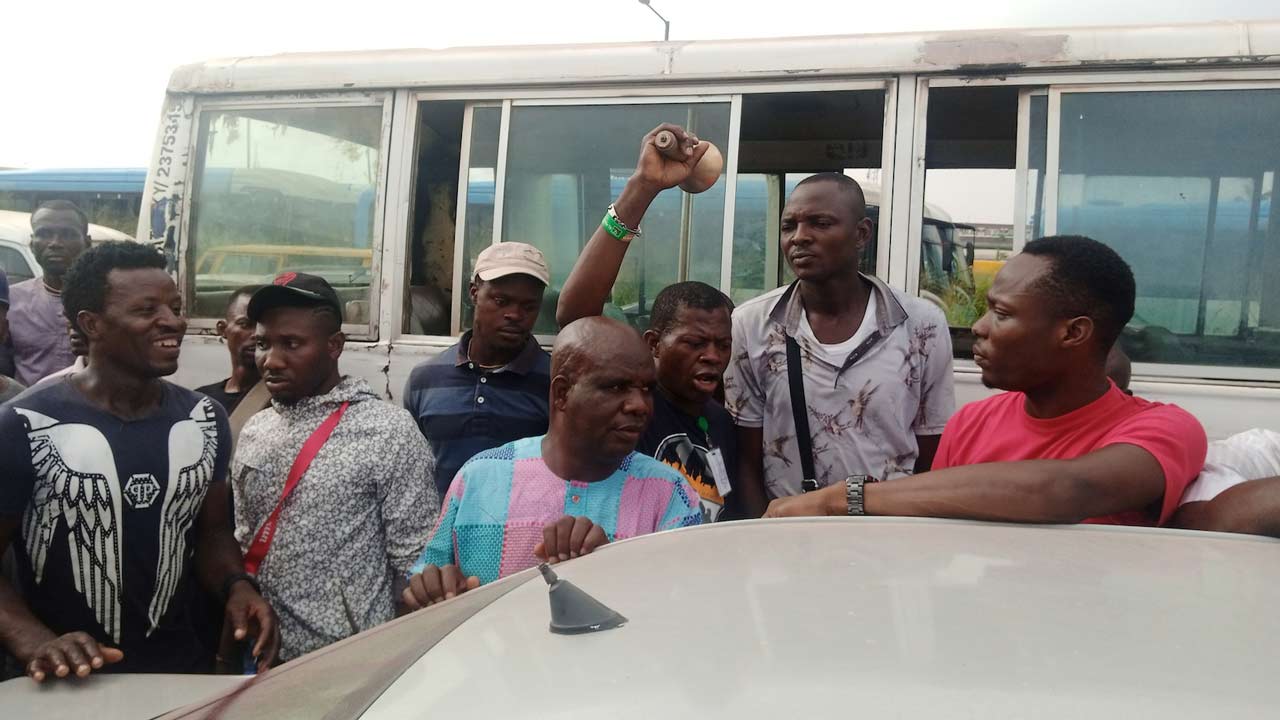 A car owner (right) looks at a smiling bidder (left) yesterday
It was a heartbreaking sight to behold for car owners whose cars were among the 44 auctioned by the Lagos state government some days ago.
In a report by Guardian Nigeria, some of the car owners whose cars were auctioned revealed the sorrow in their hearts watching their cars auctioned.
“My heart bled seeing my car auctioned in my presence. I tried bidding, but each time I bid, there was always someone adding N100, 000 to my offer. That was how I lost my car, which was auctioned for N1.2 million.” These were the words of a former owner of Toyota Corolla 2003 model whose car was auctioned yesterday told Guardian Nigeria.
It was mixed feelings for car owners and bidders as the Lagos State Task Force on Environmental and Special Offences auctioned 44 vehicles forfeited to the Lagos State Government for traffic offences.
Offenders had arrived with the expectations to bid for their vehicles and get their cars back at an affordable price but they were shocked to meet crowd of businessmen, ready with cash to also bid for the seized vehicles.
While some wore long faces as the auction continued, others openly wailed persuading bidders to let go of the auctioning. A woman in tears appealed to some police officers present to stop the auction at her bidding price, as it was the only source of income for herself and children.
The process usually starts with the car owner appealing to the crowd of potential buyers to allow them bid for their cars alone, starting with N100, 000 but some young men carrying nylon bags loaded with cash would scream N500, 000, N1 million and jerk up the price.
One of the owners of a Toyota Camry car collapsed when her bid of N100, 000 was raised to N1 million by another bidder. All entreaties and acts to curry public sympathy for moderate bidding fell on deaf ears as ready buyers raised the bid beyond the reach of the owners.
Some of the cars auctioned were Murano Nissan for N450, 000; Toyota Sienna for N850, 000; Honda CRV for N1.550 million; Toyota Corolla 2003 for N1.2 million; Toyota Camry 2008 model for N1.9 million; Hyundai car for N300, 000; mini bus for N505, 000; a 14-seater bus for N4 million, and a Mercedes Benz SUV for N9 million.
The owner of Hyundai Elantra 2008 model said he was arrested on November 10 for driving ‘one-way’ at Constain/Iponri Bridge, Surulere. He claimed that officials of the Lagos State Traffic Management Authority (LASTMA) directed cars to ply ‘One-Way’ to ease traffic but was surprised he was arrested and arraigned before the mobile court while others were let go.
Spokesman for the task force, Taofeek Adebayo, said the exercise became necessary to punish offenders, with the aim of easing traffic on Lagos roads, adding that the action was not punitive but corrective in nature.
“This is purely to serve as a deterrent to law breakers because since the #EndSARS protest ended, motorists have been driving recklessly against traffic, driving on BRT corridors and causing obstruction on highways, not minding security personnel on the road, which contravenes the Lagos State Transport Sector Reform Law 2018.”
He noted that the exercise would continue, as more forfeited vehicles by the court would be auctioned to the highest bidder.
Top Stories