The governor, who wore the same brown ‘agbada’ as his siblings and children, looked pensive despite the sunglasses he wore. 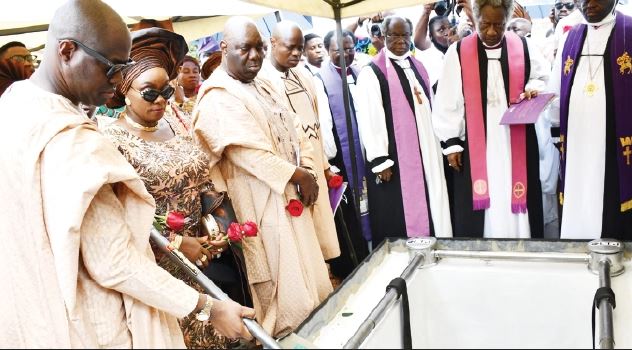 The governor on Friday wept during the funeral of his mother, Abigail Makinde, who died on October 15, 2020 at the age of 80.

Makinde, who wore the same brown ‘agbada’ as his siblings and children, looked pensive despite the sunglasses he wore as they walked behind the casket bearing the remains of the deceased.

The casket was wheeled on a cart into the Cathedral of St Peter’s Aremo, Ibadan, which was packed full hours before the programme started.

Makinde was called to speak close to the end of the programme, and as he paid tribute to his late mum and said he chose not to be sad, he broke down in tears.

Makinde said, “I am here to just pay tribute to my mother, Mama Seyi. I grew up to know her as Mama Seyi even though I was not the first child. She lived for me and for all of us.

“Each time she wanted something from me, she would remind me that two of us almost died when she was giving birth to me.

“Mama Seyi, I will never forget you. You taught me contentment. I could only have what you could afford and there was a unique way that mama would tell me that she could not afford so-and-so.

“Mama, you disciplined me, even though it was tough at that time, it seemed painful because of the so-called tolerance for physical pain. Mama’s discipline made me what I am today. I will forever miss you, mama.

“I inherited many traits from you. Some people will say we are stubborn but I will rather say we know what we want and we always go for it. Thankfully, anything we insist on doing always ends in praise.

“She did not want me to go into politics but I stubbornly refused. But when I became the governor in 2019, after winning the election, she laughed and said she was now the governor’s mother and deserved all the privileges that went with that.

“Mama, you taught me to love God. Her favourite song was the one about Cain and Abel. You taught me to always bring my best gifts to God. You said it was how we could appreciate him for his love and protection over us.

“I will always hold those thoughts to my heart. Mama Seyi, you are irreplaceable. Mama, today I choose not to be sad because you have passed away, but I prefer to rejoice. You lived a fulfilled life.

“I shared nearly 53 years of my life with you. I am happy because I will forever treasure the beautiful memories I had while growing up as your son.

“Mama Seyi, this is the celebration of your life. Rest in the bosom of our Lord until we meet to part no more. I love you, mummy.”

The  Archbishop of Ibadan Province, The Most Revd Segun Okubadejo, in his sermon, said the deceased lived a godly life, urging people to emulate her good deeds.

The funeral was attended by a representative of former President Olusegun Obasanjo, Mrs Bola Obasanjo.

Also in attendance was a representative of the Secretary to the Government of the Federation (Boss Mustapha), as well as governors, including Rotimi Akeredolu of Ondo State; Kayode Fayemi of Ekiti State; Babajide Sanwo-Olu of Lagos State; Ifeanyi Okowa of Delta State; Godwin Obaseki of Edo State; Nyesom Wike of Rivers State; Udom Emmanuel of Akwa Ibom State; Dapo Abiodun of Ogun State and his wife; Aminu Tambuwal of Sokoto State; and Adamu Fintiri of Adamawa State.

Also, the National Chairman of the Peoples Democratic Party, Prince Uche Secondus, led other members of the party’s National Working Committee to the event.

Also in attendance was a former governor of Anambra State, Peter Obi, among other dignitaries.

The Special Assistant on Media to the Rivers State Governor, Kelvin Ebiri, in a statement on Friday said the event witnessed prayers for Makinde’s family.