A man who has been sleeping with his daughters with the consent of his wife has been nabbed. 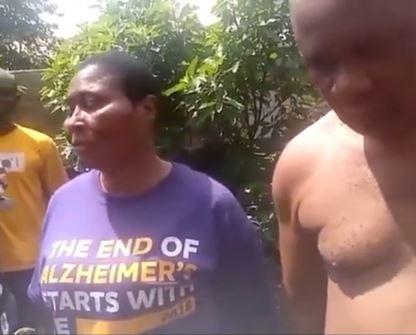 The man and his wife after they were nabbed
A Nigerian man who enjoys sleeping with his daughters has been exposed.
According to reports, the man has been sleeping with his two daughters with the consent of the mother, his wife.
It was gathered that the suspect has been having canal knowledge of his daughters for over three years with the consent of his wife.
His incestuous affair was blown open when the relatives suspected it and swiftly engaged other members of the extended family and a native doctor who further revealed and exposed the father’s illicit acts with on children.
Watch the Video Below:
Top Stories