A Nigerian actress has been dragged online after being accused of wrecking the financial life of her baby daddy. 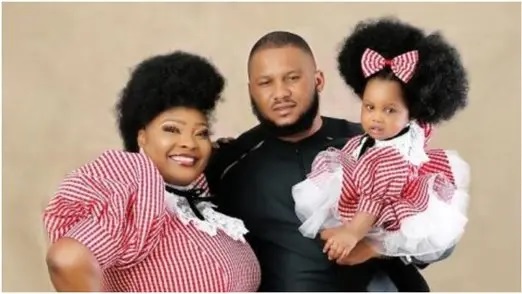 Ronke Oshodi accused of wrecking her baby daddy's life
Nigerians have stormed the Instagram page of Actress Ronke Odusanya cursing and insulting her over alleged reports that she wrecked the financial life of her baby daddy, Jago.
This comes after news emerged last night that the actress is fighting for sole custody of her daughter with the help of Barrister Festus Keyamo.
The report further claimed that Ronke Odunsaya is demanding restraining order to avoid her estranged lover from coming anywhere near her and the Baby after making him sell off 3 out of his 4cars to foot her bills.
“Trouble started when their daughter wanted to celebrate her 1st birthday,Ronke requested for millions of Naira  from her baby daddy and told him that she is a celebrity and she must celebrate the birthday in a very big way,the guy had to sell one of his cars worth 12m for 4m and and gave Ronke the 4m of which Ronke didn’t end up celebrating any birthday,” the report reads.
In addition it was also revealed that Ronke advised Jago to sell his house worth 90million in order for her to set up a big, classy business but Jago’s mother prevented her from achieving her goals.
“The mother refused to release the document saying Jago already sold all his properties including lands and this is the last property. He will help the guy secure it with her last blood,the reason for asking him to sell the house is because according to Ronke, she wants to level up to Mercy Aigbe and co because she said they all have a studio now where They keep all their equipment and they don’t need to rent whenever they want to shoot,they can also rent out the equipment to others who don’t have,she requested 65m for  her to set up the said studio, the mother refused to release the document to the house and said her son is under Ronke’s charm. Ronke has since been threatening the guy with Festus Keyamo and EFCC,saying she knows people in Lagos and will make EFCC come for the guy unto say Na Yahoo Yahoo be the guy,” the report stated
Although the actress is yet to react, her fans have stormed the comment section of her Instagram page to attack her.
One Tomi wrote “our evil charm has failed you, just carry shit for back say na yansh, oniranu jatijati @iyaboojofespris @real.mercyaigbe @toyin_abraham y’all should come and show @ronkeodusanya way, before she kills somebody’s son, una sef no pure, always sleeping with ppl’s husband and still fetish, may your charm fail y’all some day, introduce ronke to ur sugar daddies cause she’s depressed, una don press her neck tire, now it’s time to help her.”
One Queen Pepe wrote “Iya agba! Ngbo they said you want to drain your baby daddy? They said you want to ruin him patapata with your constant money requests. We heard you’re trying to destroy his life because you’re trying to be like mercy aigbe, iyabo ojo and co and that you every cheated on him while still breastfeeding….we also heard you are trying to take his child away from him using your connection (bumbum) because he stopped meeting your outrageous money needs and that you did fat transfer to the butt. We used to think you are one sensible person oo. All the above listed did not even pain me except for the fact that you want to spoil the poor guy’s life because you’re trying to live up to mercy aigbe’s standard.
Is he your father? How can you be so heartless? You want to take away everything he has worked for because you want to be a big woman by force, You are shameless and heartless.
So many people spoke well of this guy under gistlover’s post, according to gistlover, he is now suicidal. Just so you know, if anything happens to this man, you will get endless days and months of trolling. You will regret doing this.
And yes I composed all this for you so that you can know how wicked you are. Oloriburuku Omo, gold digger”
One Ayanfe wrote “Mama be nice on ur baby daddy o. Dis life no balance na manage and package everyone dey o. May God heal everyone going through hard times..”
One Funbi wrote “Abeg free the father of your child o…bcos I dont know how you want the child to feel when she grows up that her mum caused the downfall of her father….if not for anything, free the man bcos of ur daughter’
But for the ongoing drama, actress Ronke Odusanya as at September, 2020 had concluded plans for legal marriage with her babydaddy, Olanrewaju Saheed aka Saheed Jago.
In an interview last year, Ronke Odusanya revealed that her baby daddy and soon-to-be husband, Olanrewaju Saheed aka Saheed Jago is not divorced as widely reported but a single father of one.
She said, “The good thing about him is that he is not married. Which also means he has never divorced but he has a child. A son who is 5 years old now. I met him and we became partners. If we decide to do anything further, you guys will hear about it. We have been out on two or more occasions. 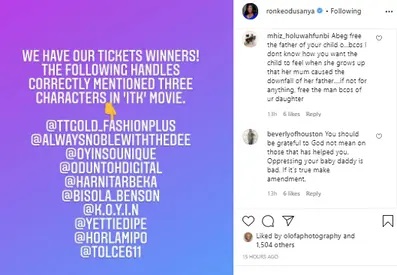