Residents Protest Against Emir of Kano for Snatching Their Land (Photo)


Amid the coronavirus pandemic, hundreds of Kano residents have taken to the streets to protest the seizing of their lands by the Emir of Kano. 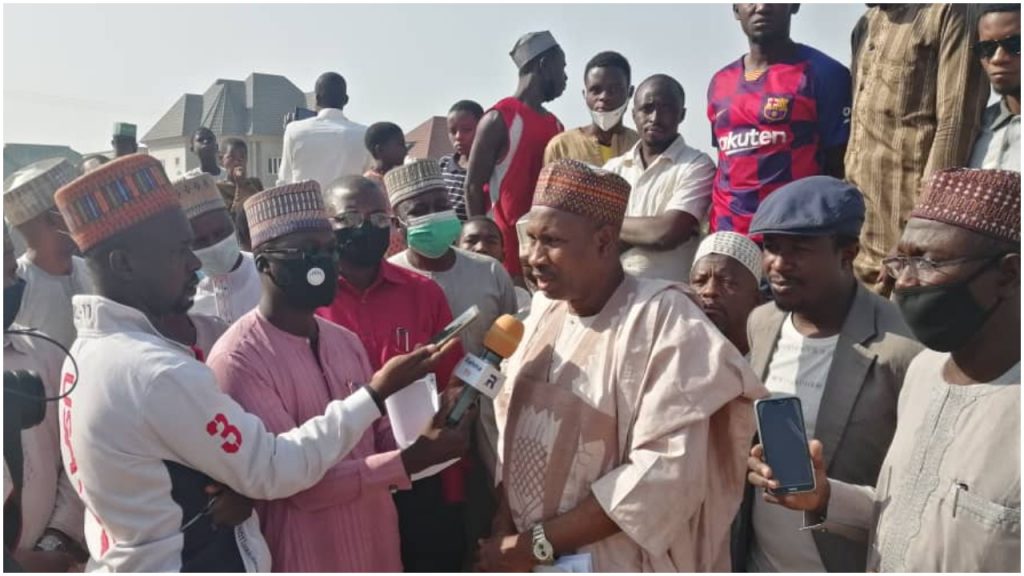 Residents protest in Kano
The Emir of Kano, Aminu Ado Bayero has been accused of dispossessing residents of their land.
This comes after hundreds of Kano residents took to the streets to protest the seizure of their lands which houses their Jumaat Mosque and Graveyard by the Emir of Kano Aminu Ado Bayero.
The residents of Darmanawa in Tarauni Local Government Area of Kano State, who are under the auspices of Darmanawa Layout Development Association, accused the Kano emirate council of attempting to illegally grab Y’ar Akwa Eid Praying Ground by Ado Bayero Royal City Trust Fund, an agency of the Kano emirate council.
Addressing journalists at the premises of the land yesterday, Chairman of the eid ground committee, Barrister Tijjani Yahaya alleged that the emirate was planning to snatch the eid ground, located at Darmanawa layout and convert it to residential plots for commercial purpose.
He explained that the land was donated by the late Emir, Ado Bayero, to be used as eid praying ground and subsequently gazetted by the Kano State government following the creation of Darmanawa Layout in the early 80s.
Bar. Yahaya said the association first scuttled an attempt to encroach the land in 2019 when it petitioned the Bureau for Land Management when there was an attempt to encroach on the land.
He said the piece of land is the only eid ground in the whole Tarauni Local Government Area.
The chairman also disclosed that the association, last year scuttled another attempt by the Ado Bayero Royal City Trust Fund to illegally take over the land, adding that they had approached the emir of Kano, Aminu Ado-Bayero to wade into the matter.
Yahaya added that the Emir had then asked the warring parties to maintain peace and order for an investigation into the matter.
He further disclosed that in an attempt to protect the land from illegal grabbing and encroachment, the association also wrote a petition to the Kano State Public Complaints and Anti-Corruption Agency in October 2020.
“While we were awaiting the outcome of these petitions, the representatives of the Ado Bayero Royal City Trust Fund tried to forcefully take over the eid ground which we successfully scuttled the attempt on December 30, 2020.
“We, therefore, challenge and call upon the Ado Bayero Royal City Trust Fund to provide any evidence of ownership of the said eid ground, which has been designated as public on plan number TP/UDB/18 by the then Kano State Urban Development Board as gazetted by the Kano state government,” he said.
Bar. Yahaya also said the association had intimated the emirate council of a reminder to its petition, but to its dismay, it saw Police officers deployed to give cover for a team of labourers brought to cut down the trees in the land on Monday.
“The large consignment of armed officers under the command of a superintendent of Police besieged our layout and the whole community in the latter part of yesterday, 1st February 2021 and gave cover to a team of people with cutlasses who proceeded to cut down all the trees that have been grown on the eid ground for over 15 years and provide shade to the teeming members of the congregation during the eid prayer sessions.
“When we approached the SP, he informed us that the order for the exercise came from the Commissioner of Police, Kano State. We intend to seek for an audience with the CP to brief him on our position on the matter,” He said
He also stated that the association would do everything within the ambition of the law to protect and prevent illegal encroachment and conversion of the eid ground into commercial residential plots.
“On behalf of the teeming members of the larger community within and around this sacred ground for this and other generations yet to be born to continue to benefit from the intended purpose for which this eid praying ground was donated by the late Emir of Kano, Alhaji Ado Bayero,” he stated.
Top Stories