The award-winning actress said women are hard workers just like men and their success should not be attributed to their sexual prowess with men. 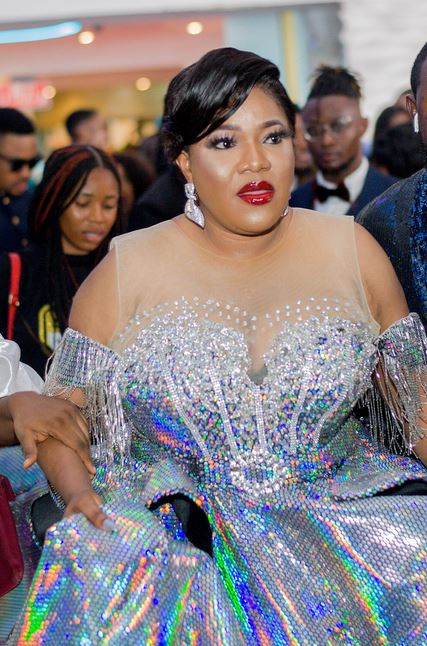 Following the post Nigerian rapper, Ruggedman made about  female actresses making it more than their male counterparts, Nigerian actress and producer, Toyin Abraham Ajeyemi, has reacted.

''My male actors in nollywood whats going on? Its just the females that are buying cars and building houses left and right. I wanted to come into nollywood but at this rate, I am not coming again''

Reacting via her Instagram page, Toyin said she understands what Ruggedman was trying to say and finds it saddening that many people seized the opportunity to say derogatory words against female actors.

The award-winning actress said she knows a lot of women who charge in millions in the film industry and that she is one of them. She stressed that people need to stop attributing the successes of women in whatever industry to her sexual prowess with men.

“I saw the social media post made by respected rapper, Ruggedman about women making more money and doing well better than men.

I read between the lines and saw what Ruggedman implied. It is a little bit sad that many people on social media leeched on it with many derogatory comments about women especially those of us in Nollywood.

It is important that I put this out there that many women make money and make good money legitimately. I know actresses who charge 2 million, 3 million and 5 million in this Nollywood. I get paid in millions of naira for gigs.

As a a matter of fact, I just paid for a very good car worth millions of Naira and at the same time I know a lot of men in Nollywood who are doing extra ordinarily well and paid in millions. The fact that most of these men choose not to make noise on social media do not in any way mean that they are second class citizens in this industry.

We need to stop attributing every woman’s success to her sexual prowess with men, women deserve the success they have as much as men without attributing it to their sexuality.

Even script writers that are not in the limelight are getting paid in millions. It is disparaging to put the successes of these women within the box of their sexuality.

A lot of women are doing great things legitimately. I am one of them and so also are many other women in other industries not just the entertainment industry.

A woman is more than the sum total of her sexuality.” 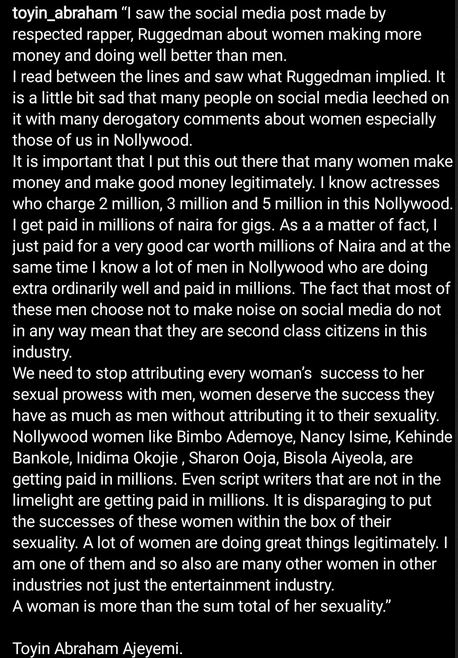